Many of you know Canadian author Julie E. Czerneda as the former biologist turned science fiction novelist published by DAW Books NY. You may have read her Clan Chronicles series, or be a fan of Mac or Esen from her other work. Maybe you’ve heard she’s an editor. Also true. This spring, however, prepare to meet the Julie you don’t know. After three years of work, she’s letting out her whimsical side with the release of her first fantasy novel, A Turn of Light, also from DAW. The setting, Marrowdell, is based on pioneer settlements in Ontario. There are toads. And dragons. The magic? All her own. For more about Julie’s work, including book excerpts and upcoming events, please visit www.czerneda.com. 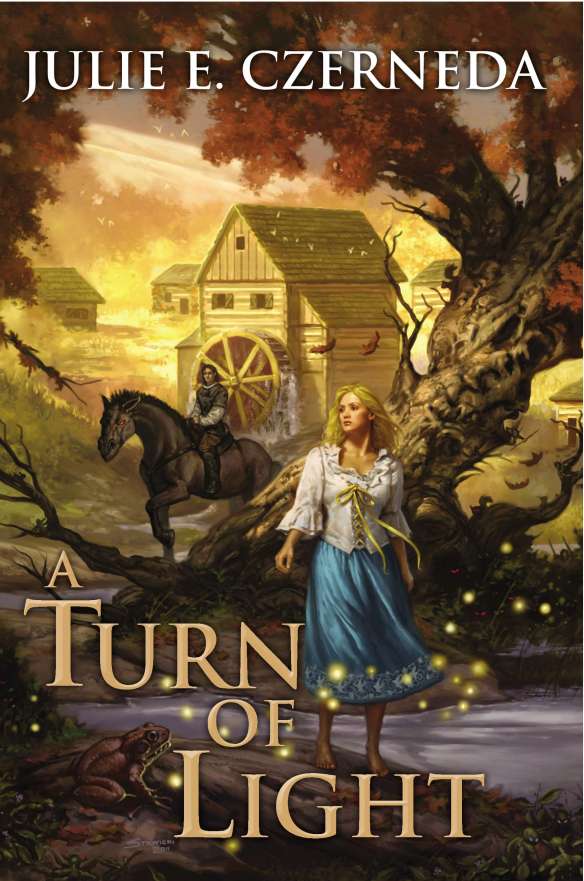 To say I’m not known — yet — for magic is an understatement. There’s not a whiff of it in my previous novels; for good reason, since those were science fiction. But I knew there’d be magic in A Turn of Light. The first paragraph I wrote of this story, decades ago, told me what kind I wanted. My kind.

Jenn laughed. The sparkling sound brought up the nose of a curious digger, crowned with a moist dab of soil. Nearer the forest, a rabbit paused, ears flat back to listen for the swoop of an early-hunting owl, and found the strength to jump into the safety of a thorn bush. While on the Northward Road, a weary stranger lifted his head and caught the scent of sunwarmed pine.

Magic innate, yet without guile. Magic of extraordinary consequence, often unexpected. Magic both carefree and wild.

I don’t write magic as tech. To me, that’s too close to science fiction, which I do write very differently and adore for itself. If I had boxes in my brain, tech would be in lovely organized rows and magic would spill throughout and betwixt as lush green vines and ancient silvered spiderwebs. With toads peering between.

I prefer not to do magic as spells. Here’s another bit from that very first paragraph.

The shimmering spot beside her on the hill began to whirl, the long rays of late afternoon sun picking out confused motes of dust caught by its frenzy, yellow pollen spiraling up in streaks of gold.

This introduces my dragon to readers (and to me). Magic again innate. Magic that belongs, as bone or breath belongs, to particular shapes of life. Magic as power is a potent theme in fantasy but in mine, including Turn, I give it away. To beings who are magic, for magic is what they can’t help but do. Here be wonders.

Or monsters. It depends on you. I’m more interested in our reaction to magic than in magic itself. How open to different are we? How willing to give respect instead of fear? If magic is the embodiment of imagination, who embraces it? Who walks away, oblivious? Who flees?

By lamplight, the roses were blood red and black, trailing over the lines of roof and wall, nodding overhead. She’d need a ladder to reach one; not that flowers would let themselves be picked. “I’m here for Poppa,” Jenn whispered. She lifted her hands. “He needs you.” There was a snap somewhere in the darkness overhead, then a single bloom tumbled down. It landed, dew-damp flower and stem, across her palms, and had not a single thorn.

There’s earth-rending magic in Turn as well as dire peril, because there are consequences not to ignore. There’s Bannan, with his truth-seeing eyes, and Jenn Nalynn, on a journey that will change everything she knows. Looking back, however, I find the smallest bits of magic are what I love best. The talents of  house toads and efflet. The ability of a horse to express opinion. The courage of a dragon.

Hurried, his body creaked and strained and tried to fail. The turn slid over and passed him as he pushed his way between neyet. Ylings trilled warnings. Nyphrit slipped into their holes. His useless foot snagged in a root and he pulled if free with a jerk that snapped bone. The road at last. He flung a breeze outward, “RUN!”

Before writing A Turn of Light, I worried if I could set aside, for the time required, my science and science fiction self, the one that demanded rigour and explanations and would never let anything of magic slip by. (Wonder, yes.) I used all sorts of tricks, a topic for another blog, to ensure I changed whatever I could of my work environment and my craft. When I sat to write that first day (October 2nd, 2009, if you’re curious), none of them mattered. I literally trembled.

I thought, then, of how very much I loved imagining my kind of magic. How, if there’s anything I’ve learned over the years, it’s that readers respond best to what I care about most. Write from the heart, I told myself. It’s always the right advice, even when it’s terrifying. Just like that, my fingers flew over the keys and A Turn of Light came to life.

(All quotes from A Turn of Light, DAW Books, used with permission.)