With my recent contribution to the Lords of Gossamer and Shadow RPG Kickstarter, I’ve been thinking about Roger Zelazny’s Chronicles of Amber. I’ve loved those books since high school. If I am absolutely backed into a corner by persistent inquiry, it’s these novels that I label as my all time favourites (still a bit of a cheat I know, to name a ten books series when someone asks you for your favourite novel singular–if I’m forced to narrow even further, then I pick the second novel in the series, The Guns of Avalon to fill the spot).

What does this have to do with GMB Chomichuk’s serialized comic book, Raygun Gothic? When I first read the first three issues of Chomichuk’s latest work, it reminded me of the vastness of Zelazny’s Amber, and I don’t make that comparison lightly. So what is Raygun Gothic?

Raygun Gothic is: a bombastic science-fantasy tale that spans 14,000 years of  history and the lifespan of one person who is cursed to live that long in protection of humanity.

Raygun Gothic is: knights and dragons and monsters and witches and werewolves.  It is also robots and cyborgs and aliens and starships.

It’s also been serialized on Bleeding Cool and garnered Chomichuk two Prix Aurora Award nominations. GMB Chomichuk and I were guests at Keycon this year, and as I watched him create an original work, I was reminded of how much I loved his art, and also that I wasn’t quite caught up on Raygun Gothic.

So I dived back in, reveling in the slow reveal of an Immortal King who wears his crown from the distant past and into the far future, is called upon again to take an active role in the defense of humanity. Raygun Gothic’s protagonist would be right at home in the intrigues between the Kingdom of Amber and the Courts of Chaos,which puts him right in my wheelhouse of characters to love. 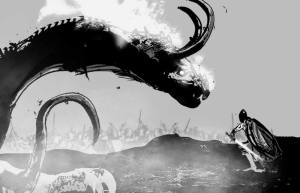 Raygun Gothic plays with Greek myths (The King’s space warriors are called Hoplites, and they attempt to breach the walls of Ilium and defeat it’s defender, Ajax). I wish like hell I would have remembered this element when I was asked for science fiction that contained mythological references at my Keycon Myth & Folklore panel! Chomichuk doesn’t merely draw on mythology, there are references to Shakespeare too. An uttering of “Once more unto the breach” or The Immortal King meeting with the Crossroad Witches of Dunsinane, who told him of his rise to power–every word they said coming true.

Chomichuk gives The Immortal King many names, Sir Water the Grim, The Forever Man, The Peerless Warrior, and with his millenia spanning career as an eternal champion, the reader can imagine The King fulfilling the role of any great warrior or monarch from literature or myth. Lancelot, Arthur, Leonidas, and yes, my favourite, Corwin of Amber. When a line like “The game we played had the world as it’s prize,” is uttered, imagined Conner MacLeod battling the Kurgan in Highlander. This wide ranging influence across genre boundaries and media plays in the story’s favour and into one of Chomichuk’s artistic strengths: mixing media with unusual and unique results.

Despite the presence of monolithic space vessels, The Immortal King rides into a space battle on a dragon. Or as Chomichuk refers to it, his genetically engineered warwing. A beast that possessed a ferrous skeleton that allowed it to ride magnetic currents “as sure as any creature took to the air.” The juxtaposition of The King wielding a sword while riding a fantastic beast into battle with robots and rayguns is something that I just love. 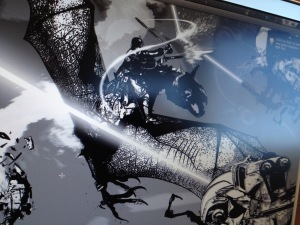 The King is empowered by a simple means: Those that would do him harm must risk the same. Whether it is drones, men, cyborgs or dragons that The Immortal King faces, he is up to their challenge, made equal to them by the nature of his gift. As the King battles Ajax he notes, “He had evolved to overcome the science of war. What I did was art.” And what a work of art this comic is! Only five issues in, and so much more to come. 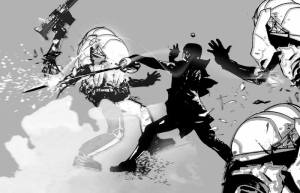 What are you waiting for? Read Raygun Gothic here:

Let me know what you think of it, in the meantime, I’m going to reread The Imagination Manifesto.