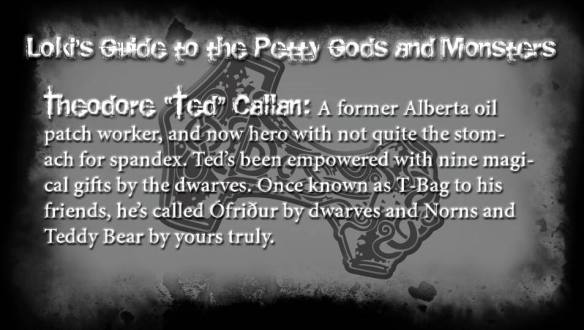 Ted Callan doesn’t appear in any of the Sagas. But my protagonist certainly has roots there. One of my favourite stories growing up was the Story of Sigurd; a hero who became invulnerable–except for a spot where a leaf had landed against his body-when he bathed in dragon’s blood. I was checking this out of the library in between my obsessive readings of D’Aulaires’ Book of Norse Myths and D’Aulaires’ Book of Greek Myths.

Sigurd obviously isn’t the only influence on Ted. He carries Mjölnir; he can control the weather, so obviously Thor was also in the mix. The earliest origins of Thunder Road are in an abandoned short story–the first thing I ever set out to write when I decided I wanted to be a writer–a story about Thor and Sif living in suburban Winnipeg and Sif deciding to divorce Thor. The seeds of Ted exist in that first version of the Thunder God (there’s a very different aspect to Thor showing up in Tombstone Blues): a blue collar job, the dissolution of a long relationship, the GTO–although it was not called The Goat yet.

I always knew I’d write something influenced by Norse myth, the stories have been a part of my life for too long not to creep into my work. I didn’t have a plan for it to necessarily be Thunder Road, I just wanted to write a story about a blue collar guy who got thrust into a weird and terrible world. The first scene I wrote for Thunder Road, was where the dwarves attacked and tattooed Ted, and at the end of that scene, I wondered: “who is this guy?” and “How did he up in that hotel room?” And so I went back and wrote that. Once I put him in a GTO, it was all over, and I was hooked. Ted voice showed up almost fully formed and steamrolled his way through the rest of the book.

I didn’t just read mythology as a kid. I also grew up reading comic books. In fact, they were the first things I read on my own. Looking back, I can see echoes of DC’s Viking Prince or Marvel’s Mighty Thor and Uncanny X-Men. Thor has faced Ragnarök  several times in the comics, which was one of the reasons I decided to set Thunder Road after The Fate of the Gods, because I found what the Thor writers did when they ended the cycle to be fresh and new. X-men probably gave me a taste of the dysfunctional family dynamic that exists between Ted, Tilda and Loki. Chris Claremont’s epic run on the book was also my introduction to long-form storytelling, which is why I’m hoping that even when the Thunder Road Trilogy is done, that I can keep telling stories in this world. And besides, super powers are cool!