I am very excited to join these fine (and utterly horrific) fellows on Friday in a panel moderated by Maurice Mierau and sponsored by ACI Manitoba and the Manitoba Writers’ Guild!

David Annandale is the author of Gethsemane Hall, The Death of Antagonis, and the Jen Blaylock thrillers (also published by Ravenstone Books).

Michael Rowe is the Aurora and Sunburst Award nominated author of Enter, Night. He is in Winnipeg to launch his latest novel, Wild Fell. 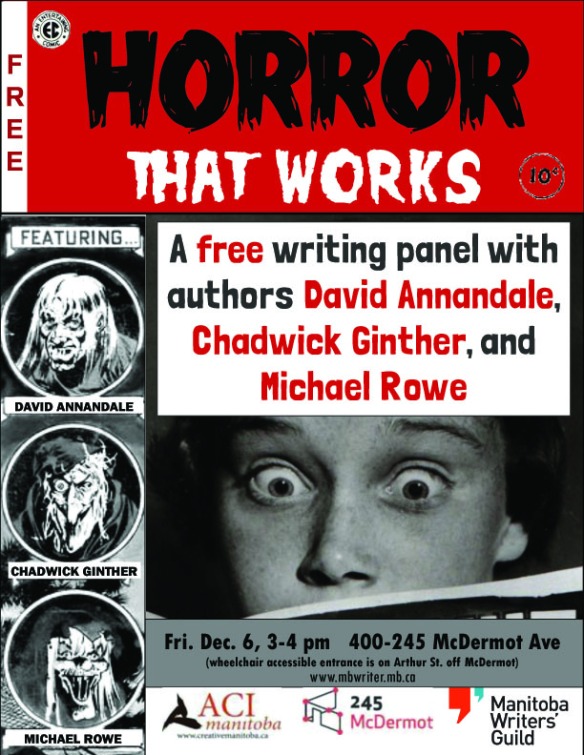 Then on Saturday I’ll be signing copies of Thunder Road and Tombstone Blues at McNally Robinson Booksellers from 2-4 pm. Hope to see you there!

So November has come and gone, and it’s taken the frenzy of National Novel Writing Month with it.

It’s hard to tell how the book turned out, as I haven’t sat down to read any of those November words yet, but I feel like this was my most successful NaNoWriMo of the three I’ve participated in. I don’t know if that’s because I’ve had this idea for the last two years, and kept meaning to get to it (2009’s idea showed up three days before November and quickly dissolved into a morrass of nonsense), but was worried I was talking about it more than I was writing it or because I managed to type the words without actually re-aggrivating my tennis elbow and pinched nerve (which was 2011’s problem). And I do know it’s not really a book yet. It needs about 25000-30000 more words to finish or flesh out existing scenes, and to create the scenes I didn’t get around to writing. The real win will be when I actually take the scattered mess, rewrite it and hone it and send it out, but this time it feels like that will be easier than my 2009 project (which I’m still revising) or my 2011 project (which I’m still writing).

I didn’t have steady, big word count days. I probably averaged around 1000 words most weekdays, and tried to make up for it on the weekends (which I usually didn’t). Having a book tour in the middle of the month and a week away from home hurt my word count for sure, but I managed some words in airports, and while I was a guest in Edmonton and Saskatoon. Not a lot of words, mind you, but enough that I was able to catch up again on my return. I did notice a shift towards the middle of the month when I was back to work where I was getting closer to my old word count goal of 2000 a day, even if those words were broken up in three tightly focused shorter sprints rather than one long sitting. I even had a near 7000 word Saturday while trying to catch up (I paid for it the next day) which I haven’t done in a long time.

I almost made the same mistake I did in 2009, which was getting distracted by a shiny new idea shortly before NaNoWriMo, but I held firm to what I planned to write this year. But on the plus side, I may already have next year’s project kicking around in my brain.

So that was last month. What’s on deck for this month?

Rereads are definitely required, because I want to make sure I resolve what needs to be resolved and leave some story for readers to imagine, should I decide to return to Ted’s world after the trilogy is done. Also, between edits, production, and promotion of Tombstone Blues, my head hasn’t been in Book 3, and I’d hate to write a scene I’ve already drafted!

This year the theme for Tesseracts is “Wrestling with Gods: Faith in Science Fiction and Fantasy”. I took in the Pure Speculation panel hosted by editors Liana K and Jerome Stueart and it was quite informative as to what they were looking for, and while I don’t know if I started writing my Tesseracts story in that panel, I definitely had an idea for a story. I’m hoping my word count momentum will allow me to draft this story a wee bit faster than is my norm for short fiction and get it revised and out the door.

The last time On Spec was open to submissions, they rejected one of my stories, asked for a rewrite on a second, and bought the third, “Runt of the Litter” (itself a rewrite request from their previous opening and a story set in the Thunder Road ‘verse if such things matter to you.). On Spec is a great magazine, and I’m thrilled that they were my first sale, which is one reason why I keep submitting stories to them (and they seem to like my writing, so that doesn’t hurt). I have three short stories completed that need at least one more round of revisions before being submitted again and of course the rewrite request. I’m not sure I’ll get them all off, but I’m going to try.

No, I will not be posting a picture of my office to show you how cluttered things have become in the last year. Nope, nope, nope.

As for those yearly goals:

Only two left to go, one is definitely not going to happen, and the other is very unlikely to happen, but I’m still going to make a run at it. The SF&F convention goal was on my list because I think it’s a good excuse to travel and see some new things and meet some new people, which is not my natural inclination. When I’d added that goal, I was intending on attending World Horror Convention in New Orleans (another goal of mine is to get that city, even if its reality might never live up to the magical place my high school self built it up into. Also, GO SAINTS!), but of course, life happened. I changed jobs and the trip wasn’t feasible anymore.

While I’ve been to Ottawa a few times before, I’ve never been to Can-Con, Ottawa’s SF&F convention. And taking in that convention did what I’d hoped for in New Orleans. I saw some new things and parts of Ottawa that I hadn’t experienced and met some great new people. I also was able to finally meet some people that until October, I’d only known from Twitter or Facebook, and I love when that happens. So the spirit of the goal was achieved, even if the letter of it was not. I won’t have a chance to get to a conference in December, so this one won’t be getting crossed off, but you will see it pop up again in January’s Goals for 2014 post.

You’ll probably see my revision goal there too, if I don’t finish another draft on an old manuscript in December. Currently, I’ll have to rewrite more than a chapter a day to succeed. But for the first time in twelve years, I won’t be dealing with a Christmas in retail. So with apologies to my friends who used to come visit me to see my infamous “Christmas Face”…

will be replaced with this: