I’ve been there quite a few times in recent years, and it feels a lot like home. Maybe because, like Winnipeg, it’s a river city. Maybe because it still has some old architecture. I can’t explain it.

I took the Red Arrow bus line from Calgary to Edmonton, which is a really nice way to travel. Comfortable seats. WiFi. It’s also not much slower than flying when you factor in time to get through security and the fact that the Edmonton airport may as well be on the moon. The bus station was only a couple blocks from the LRT line. Rapid transit has become a big part of Winnipeg’s current mayoral debate, and every time I go to Alberta, I come back thinking: “The precious. I wantsssss it.” 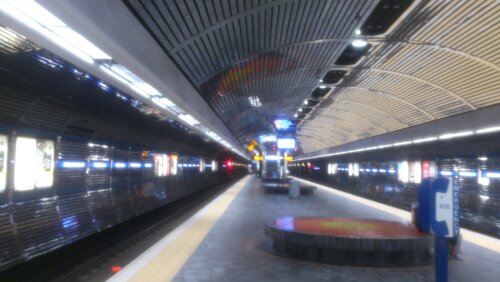 In non-book research related research, I tried cedar smoked salmon for the first time my first night in Edmonton. Normally, I hate the sea and everything in it. This meal however, was amazing. It was grilled up with marinade of maple syrup and apples. Big thanks to my Edmonton host, and old bud, Brad Neufeld for the kick ass food, and the place to hang my hat. 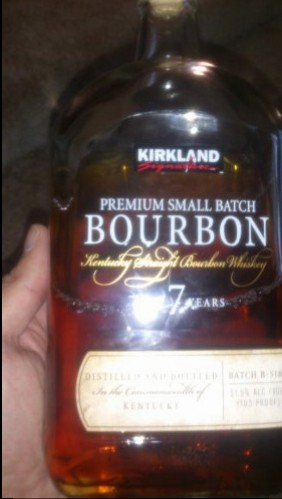 When I travel, I will now be forever reminded of the title of Robert Shearman’s new story collection from ChiZine, They Do the Same Things Different There. Case in point: one can buy bourbon at the Costco in Alberta. This was a very tasty whiskey. A little bird told me that Costco gets their vodka from Grey Goose, so I wonder who supplies their bourbon… 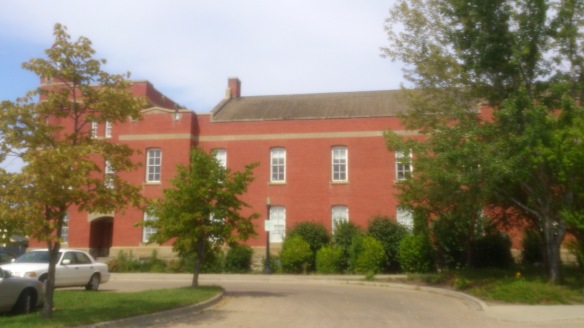 The exterior of the Edmonton Archives. I spent a few afternoons here, digging through photos and old articles. 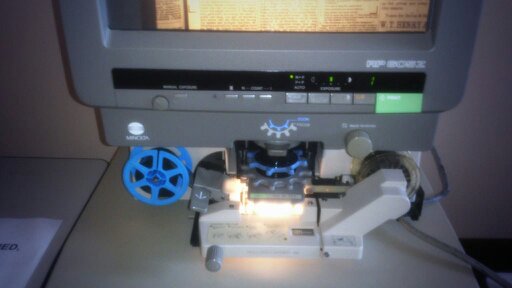 I haven’t used one of these in years. I may or may not have pretended to be a spy while I loaded the microfilm. Also, I must be cursed, because most of the machines were down, or stopped working shortly after I got started. The archivists were great though. 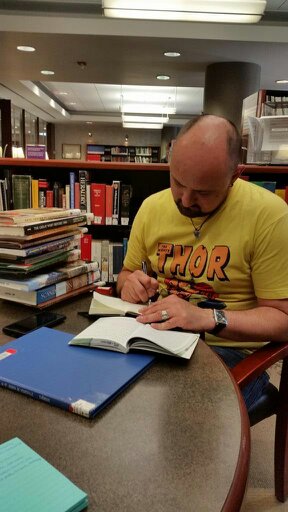 Author Billie Milholland snapped this photo of me at the Stanley A. Milner Library while I was rooting through their Heritage Room. 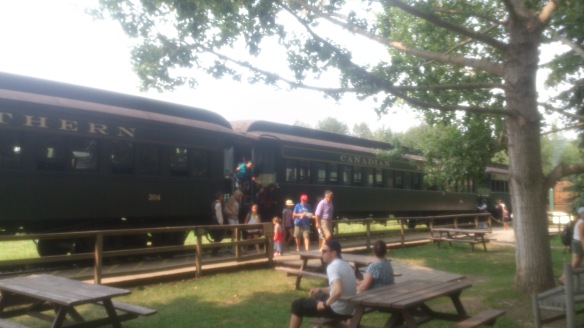 One of the things I’ve been meaning to see for ages was Fort Edmonton. It’s an interpretive park, with lots of costumed workers explaining the history of the area. There’s a similar place outside of Winnipeg, Lower Fort Garry–which is still on my list of places to go. (I really need an out of town guest to show up doing research for their book, so I can take them to all the local attractions I never get around to seeing!) 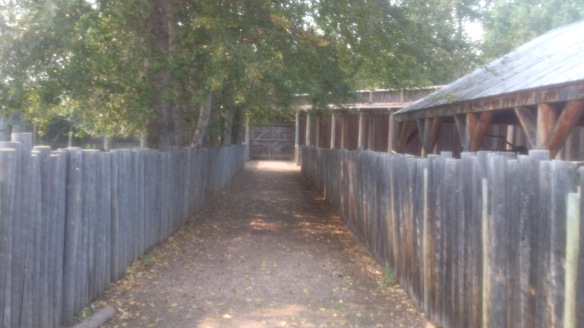 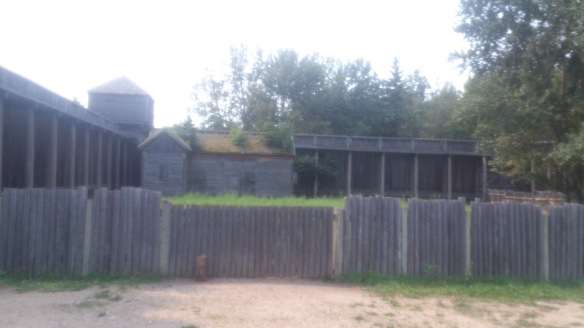 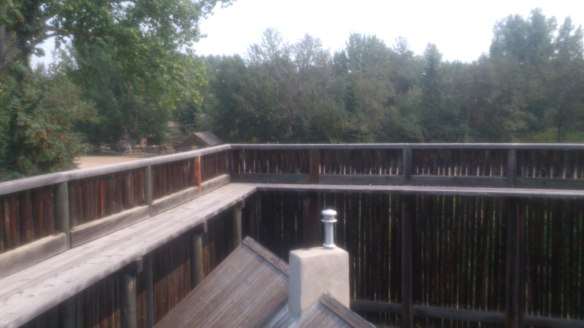 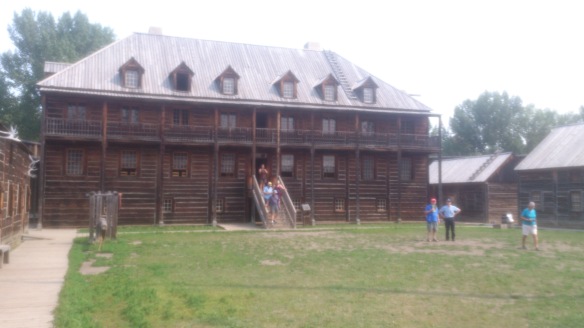 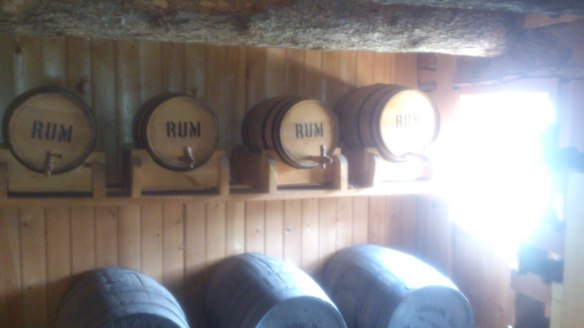 Survival tips for the northern explorer: rum. (Why is the rum gone?) 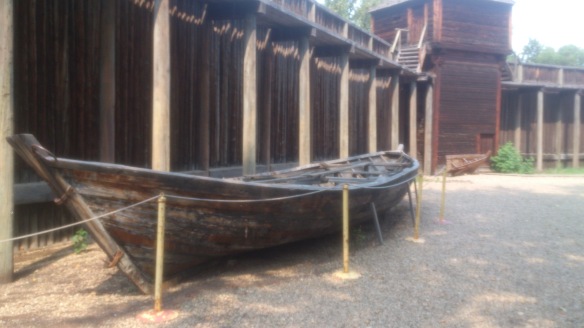 The thing that is neat about Fort Edmonton is that it isn’t just one time period. You take a train from the gift shop out to the fort and then walk through three different time periods, 1885 street, 1905 street, and 1920 street. 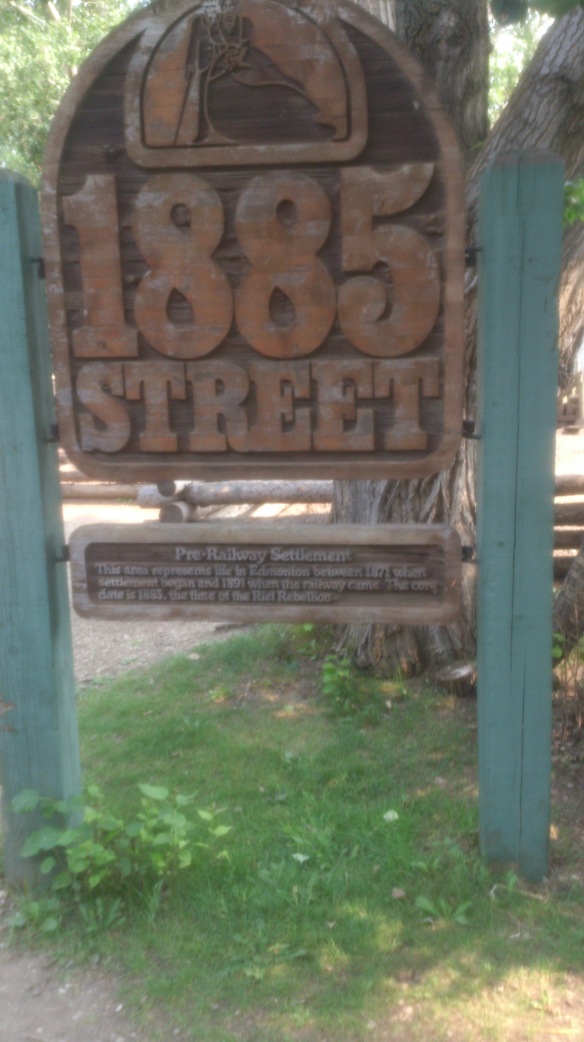 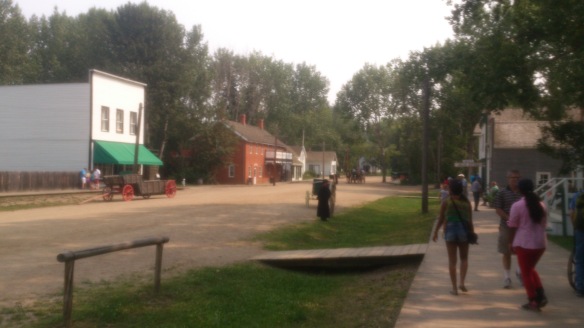 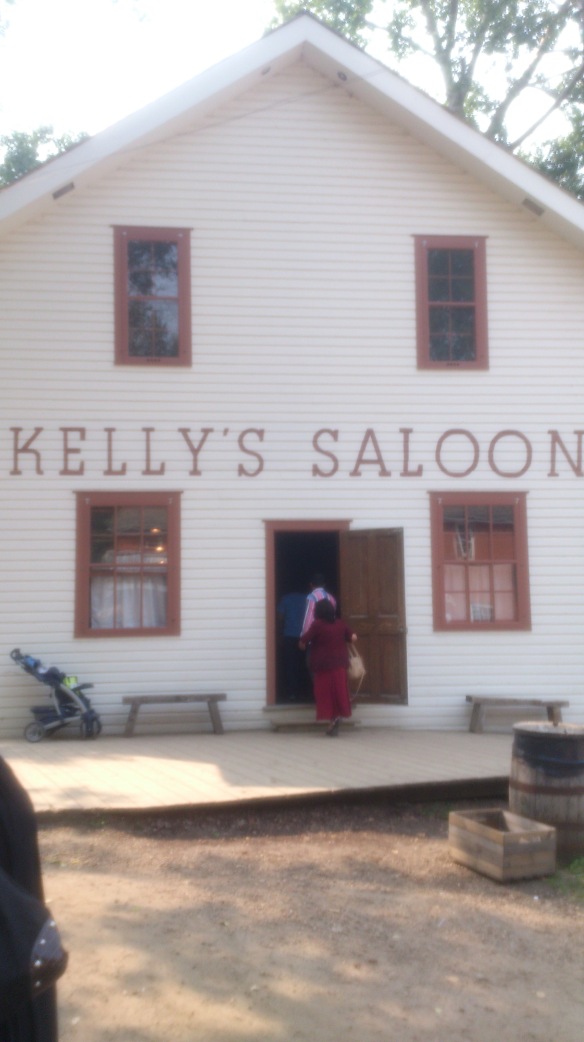 It was crazy hot the entire time I was in Edmonton, and sadly, Kelly’s Saloon was not serving beverages. 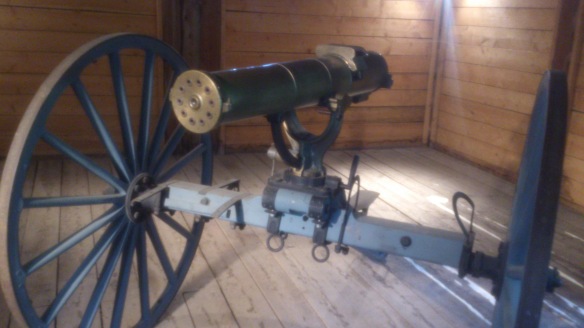 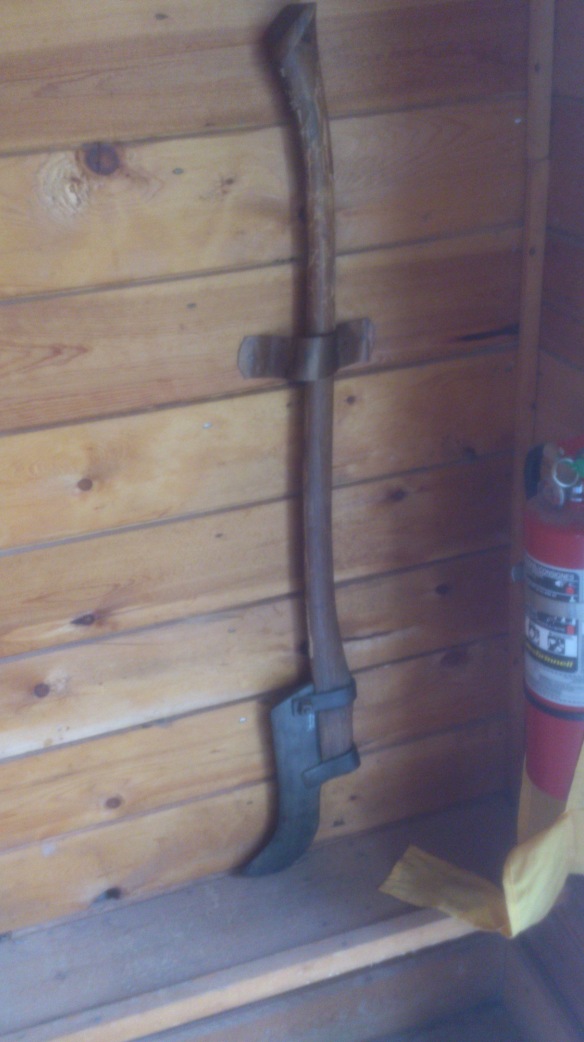 In case of emergency. 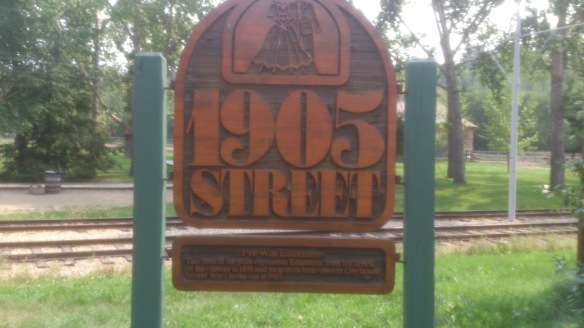 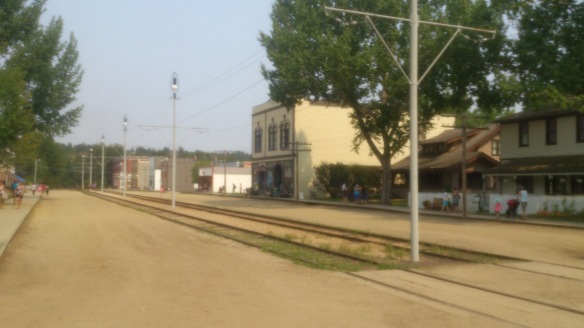 There was a street car you could hop on! (Street car not shown) I love street cars.

Unlike Kelly’s Saloon pictured earlier, the Hotel Selkirk on 1920 street does have a working bar. 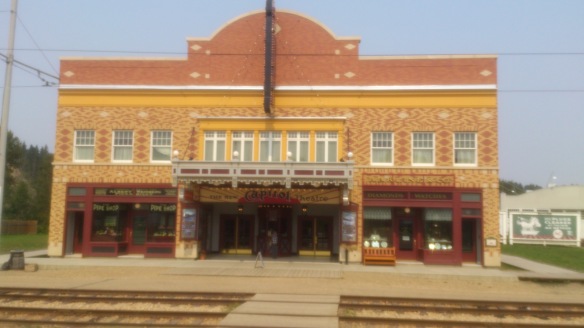 The Capitol Theatre. I didn’t have time to catch a movie, as I had to prepare for a reading.

First, though, there was an author dinner with Edmonton friends Janice MacDonald, Randy Willliams, Eileen Bell and new to Edmonton by way of New York ex-pat Winnipegger (and amazing author), the divine Susie Moloney. We went to Edmonton staple Doan’s, which has some great Vietnamese food. 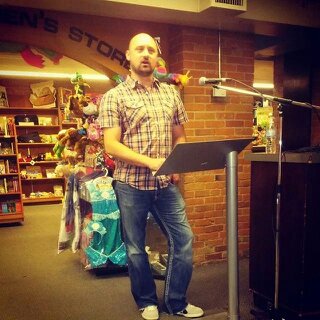 Randy Williams snapped this shot during my reading at Audreys Books.

I haven’t been back to Audreys since Thunder Road launched, so it was fun to be there again, and read from Tombstone Blues. We had a good turnout. I met a couple Facebook friends for the first time, which I always enjoy. I also found out the section I chose for my reading (The Night Mara’s attack) gave someone in the audience a nightmare. I felt a bit bad about that, but I’m not going to lie, I was also pleased that one of my favourite scary scenes genuinely scared someone. 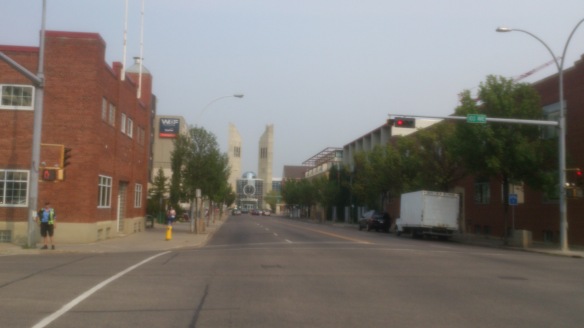 I love this view, with Grant MacEwan in the distance. It seems like a great place for some kind of showdown… 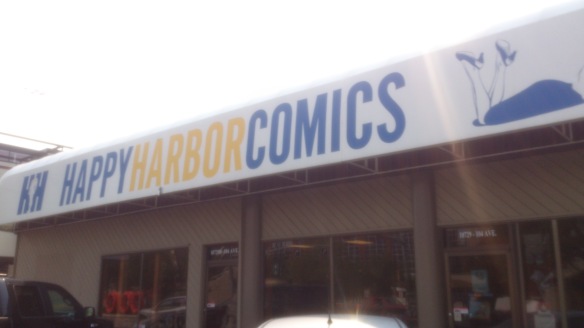 My trip happened to fall so that I missed two New Comic Book Days. (Seriously, who planned this thing. Oh…wait.) What is a visit to another city without a stop at their best known comic store? While I was in Calgary I made another visit to Comic-Kazi (my friend Kevin’s local), the staff and owner there are amazing. Also, Fiona Staples of Saga fame apparently used to work there.

I’ve heard nothing but good things about Happy Harbor, and some of my friends have done events with them. It was a very cool store. Larger and more spread out than my local (Mighty Comics, represent!) but it was easy to find what I was looking for.

Between the two stops I found a few issues I’d missed of a couple series I wanted to collect, and had the bonus of two weeks worth of my regular comics waiting for me when I got home! 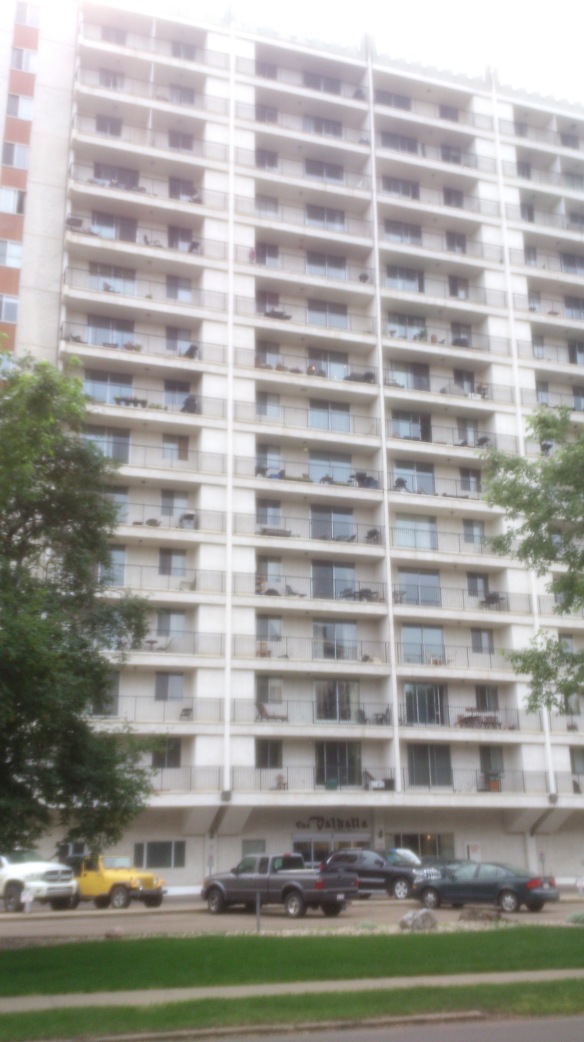 Thanks to fellow Ravenstone author, Janice MacDonald, for pointing this place out to me. The Valhalla. Perfect. How can that not turn up in book three? 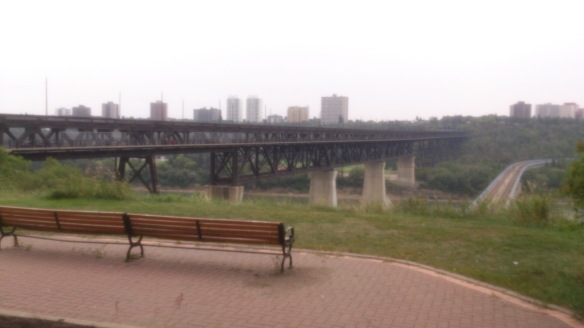 I love the High Level Bridge. One of my favourite things to do in Edmonton is walk across that bad boy. 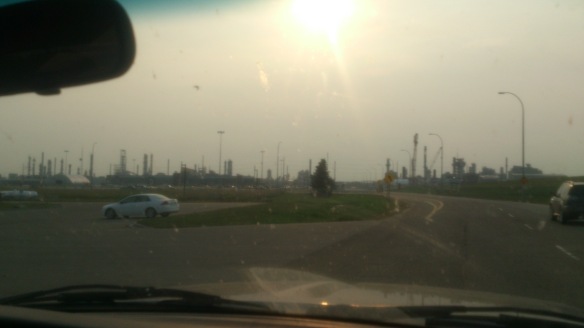 I took a drive out refinery way, by Fort Saskatchewan, not too far outside of Edmonton. These plants are huge. And from what I’m told, are completely dwarfed by the sites up north near Fort MacMurray.

It was a great trip. I love my visits to Alberta and can’t wait to get back there.

2 thoughts on “Some More Pics From My Alberta Research Trip Part Two: Edmonton”