It was my pleasure to host Julie E. Czerneda when she launched her fantasy debut A Turn of Light, and I’m so glad she wanted to come back to talk about her return to science fiction, This Gulf of Time and Stars!

This Gulf of Time and Stars releases November 3, 2015. Learn more about the series and author below, and please welcome Julie E. Czerneda!

Any skill improves with practice. Usually, that’s a good thing. It’s easier to trust a mechanic who’s worked on more than one car, just as you hope a surgeon has done a procedure several times, and successfully, before taking a scalpel to your flesh. Writing’s the same. I’ve a much better grasp of semi-colons now. I think.

But writing isn’t about the rules of grammar, although those help make it comprehensible. The tricky thing with writing is authorial voice. I didn’t realize I even had one when I started out, but everyone does. Word choice, cadence, what to show and what not—it comes together, willy-nilly, and the result is, well, how each of us tells a story.

Over time, and different stories, that authorial voice evolves, for we change with life. Usually that’s a very good thing. I like how I write now, and it’s not just my semi-colons. I strive to do better with each new book and that effort drives me forward. I’ve achieved a level of self-confidence; enough to be aware when I’m writing my best and when I should stop for the day.

Then I picked up a book I wrote twenty years ago and it could have been written by a stranger.

I stared at the hand pressed near my cheek. It had five fingers, tipped with small, blunt nails, one broken. There were smudges of dirt on the palm and back; the clean skin was paler, except where a spider’s web of red marked the edges of a cut. It was mine, I decided, confused by the delay in recognition. (From A Thousand Words for Stranger) 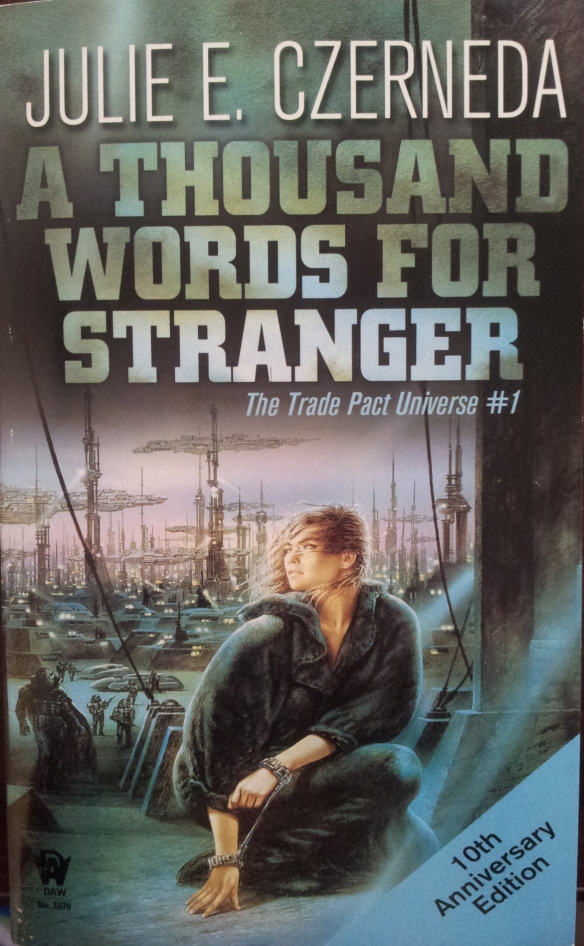 I’d confidence then too, but it was the confidence of a person who wrote for an audience of one, myself. The authorial voice is almost breathless. Excited, I remember. As a result, most of the story and world-building stayed in my head with the adventurous bits coming out as words.

I enjoyed the book, especially the parts I’d forgotten, but—it wasn’t how I write. Egad, it was even in first person!

Oh dear. And I was to write six more?

I quailed. For two months, I was convinced I’d have to tell my editor I couldn’t do it, meaning among other things I’d have to somehow pay back the advance on the outstanding books. I brought home an application to work at Timmies, mostly to threaten myself with—not that I wouldn’t have enjoyed pouring coffee, but it wasn’t what I wanted to do with my life.

You know things worked out. This was how. If I couldn’t write as I had before, I told myself at last, I could still tell a damned good story. I made myself ignore, for the moment, the unfamiliar authorial voice of the Trade Pact trilogy. I’d treat Stratification as I had any other project, choosing to use third person because that felt more comfortable. I’d build the worlds, find my characters, work the plot.

The world-building helped. Cersi and its aliens filled my head until I stopped worrying. Then, I found my starting point, a deliberate echo from the past for my readers.

Aryl Sarc stared at the hand near her face. It was hers, the knuckles white with strain beneath smudges of dirt. She eased her grip slightly, looked ahead for the next. She’d never been this high before. Didn’t matter. Couldn’t matter. She took a deep breath. (from Reap the Wild Wind) 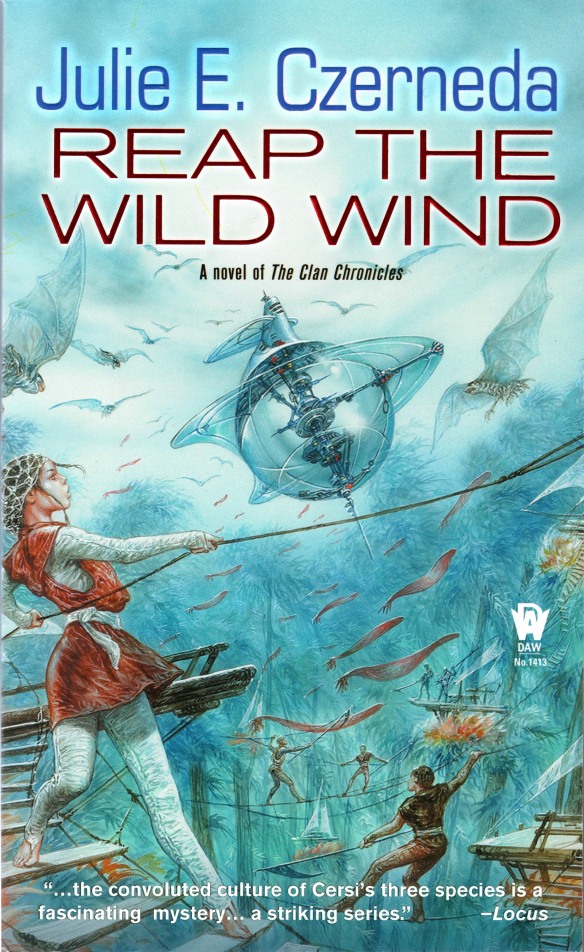 As did I. I settled in to write, only to run head-long into a technical problem. Telepathy.
I’d established in the Trade Pact trilogy that the Clan, and some Humans, have the ability to talk mind-to-mind. Emotions are shared that way too, depending on the individuals. I hadn’t had to write “inner speech” for quite some time.* I remembered DAW had a house style for it. What was that again?
I scrambled back to Thousand to remind myself. Yes. Italics. That was the ticket. Sort of. In books since, without telepathy, I’d used italics sparingly for emphasis. Eventually I tried to avoid using them at all. It felt very weird to have them all over the place, at first.

I surged ahead anyway, looking over my shoulder at the Trade Pact and my notes as necessary. 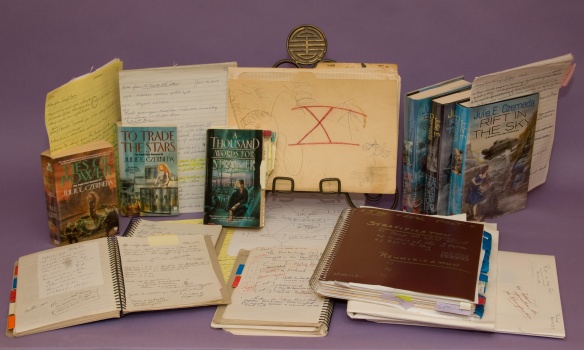 The first two books of Stratification developed their own momentum. I had this. Book three, Rift in the Sky was more complex, since it had to flow into the Trade Pact and lay the foundation for Reunification, but obsessive outlining was my friend. 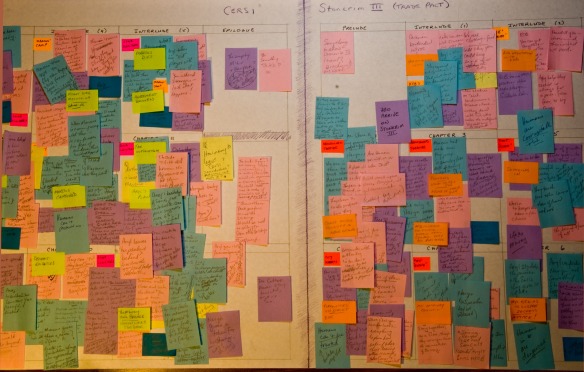 For reasons I’ve discussed in Going Dark, Why Gulf is So Different, I put the Clan Chronicles aside for five years, writing fantasy instead. I plotted and poked at Reunification, because it was humming along in that part of the brain reserved for unfinished stories, but didn’t write. I won’t say writing fantasy was exactly helpful, because I worked very hard to change my authorial voice and did.
Suddenly, it was time to write science fiction again. First person, no less. Oh dear.

Remember how I quailed back when? Not so this time. This time I recognized my fear of failure for what it was, and put it aside. Regaining my sf voice was as easy as writing a short story “A Taste for Murder.” Writing Sira di Sarc, first person, as well as Morgan and Barac?

Like slipping on a glove. This time, I didn’t look back over my shoulder. I filled my head with detail—what needed to be mentioned, what was new—and cut loose. It was exhilarating and, yes, breathless, and different.

Fingers, four and a thumb, tapped the metal edge of the vent. The fingers were dark blue from tip to second joint, as if dipped in paint.

The fingers gripped and pulled. The covering grate came free without sound or resistance, revealing an opening twice the span of those fingers wide.

The right hand led the way, scrabbling into the pipe. Body parts, riding on tough fleshy limbs and careful of clothing, followed in turn. The head produced eyes to survey the shadowed rooftop, but didn’t tarry. It ducked through the opening, canting forward so its well secured hat went first.
The left hand did what it could to pull the grate into place behind it, breaking a nail. Regardless, it subvocalized a chuckle.

At last, their time had come. (From This Gulf of Time and Stars) 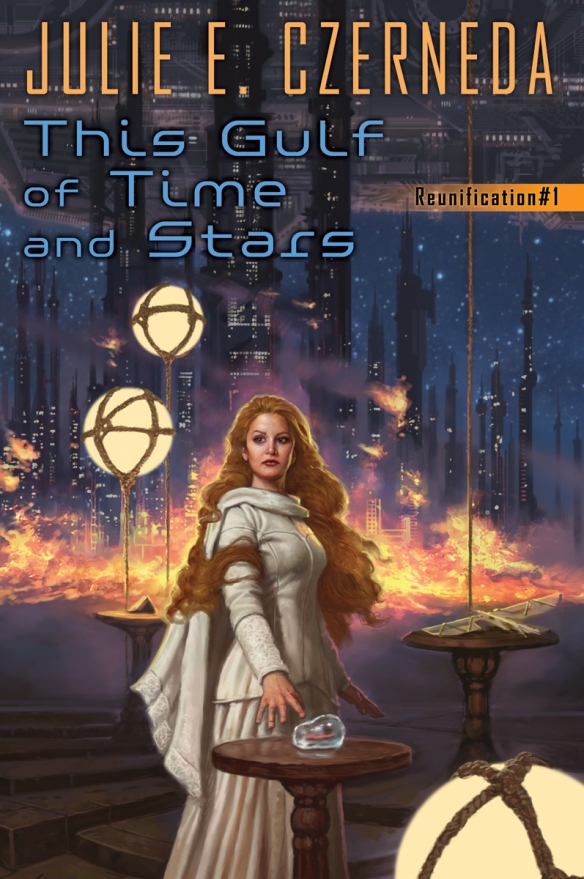 I don’t write as I used to twenty years ago. I can’t. I don’t write the way I did one year ago, for that matter, but it’s a good thing. Why should I? The result, This Gulf of Time and Stars is new and exciting and pleases me to my core. If I could have told myself all this back when I faltered, I wouldn’t be the writer I am now.

I admit, I’m looking forward to the writer I become next.

*Footnote: reading a passage aloud where some conversation is inside the head and the rest verbal is—let’s call it next to impossible to do convincingly. I did try, once, to touch my forehead a la X-Men figuring if Patrick Stewart could make it work, I could. Alas, I lacked his skill—and the convenient voiceover on the film. Suffice to say I’m still pondering the possibilities. 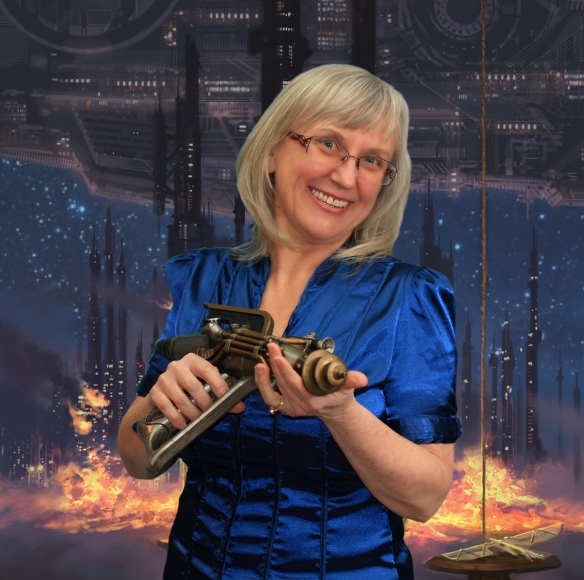 Since 1997, Canadian author/editor Julie E. Czerneda has shared her love and curiosity about living things through her science fiction, writing about shapechanging semi-immortals, terraformed worlds, salmon researchers, and the perils of power. Her fourteenth novel from DAW Books was her debut fantasy, A Turn of Light, winner of the 2014 Aurora Award for Best English Novel, and now Book One of her Night`s Edge series. Her most recent publications: a special omnibus edition of her acclaimed near-future SF Species Imperative, as well as Book Two of Night`s Edge, A Play of Shadow, a finalist for this year’s Aurora.

Julie’s presently back in science fiction, writing the finale to her Clan Chronicles series. Book #1 of Reunification, This Gulf of Time and Stars, will be released by DAW November 2015. For more about her work, visit http://www.czerneda.com or visit her on Facebook, Twitter, or Goodreads.

Listen now to a sample from the upcoming audiobook of THIS GULF OF TIME AND STARS!  https://soundcloud.com/audible/this-gulf-of-time-and-stars

Drop a comment below before November 15th with your preference to have a chance to win. I’ll be giving away one copy of each. One entry per person, please.