There are so many folks that I want to see and hang out with, have a beer with, or talk fantasy/gaming/movies with that I can’t possibly fit it all in over a single weekend. That’s a good problem for a convention to have.

I finally got to meet Robert Wiersema! We’ve only been corresponding online since…well it feels like forever, and I’m glad we made the time to enjoy a drink and talk books and writing. Cheers, Robert! Here’s hoping we cross paths again soon.

Of course I also had to have my now annual curry dinner with Angela & Matthew Keeley and Derek Newman-Stille. This year we were also joined by Don Bassingthwaite, Kate Story, and Dominik Parisien. Lots of fun! I also lugged my old tuxedo to Ad Astra, because Angela promised to wear it. I don’t think she believed me when I said she could keep it, but I sure as shit didn’t want to find the room in my luggage again.

I think she rocked the look, even if the suit was ginormous on her. I wanted her run rods through the shoulders and turn it into a Talking Heads performance piece, but alas.

The first two panels I was on had smallish turnouts, but I did have fun conversations about visual storytelling and the pros and cons of hybrid publishing, so there’s that. Superhero Universe launched and I met co-editor, Mark Shainblum. My reading from “Midnight Man versus Doctor Death” was well received, which is great, because I really enjoy reading that story aloud. My final bit of programming was a shared reading slot with Sarah WaterRaven, Leah Bobet, and Vanessa Ricci-ThodeI. I read from Too Far Gone, and was pleased with the turnout, and the crowd’s reaction to the reading. Between the four of us we drew over twenty people early on a Sunday morning. I’ll take it.

Of course, I had to spend time in the ToroLUG Lego room. 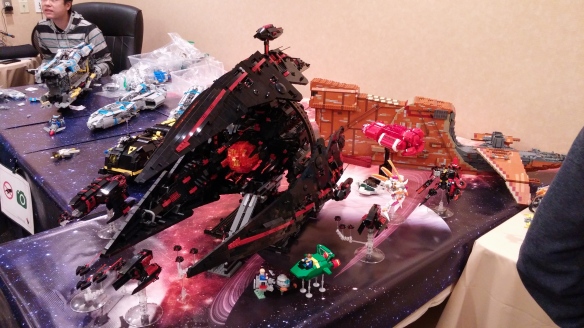 And thank you, as always to Bakka-Phoenix books for their support. I signed all the stock they brought, so if you missed connecting with me in Toronto, check them out for signed copies. 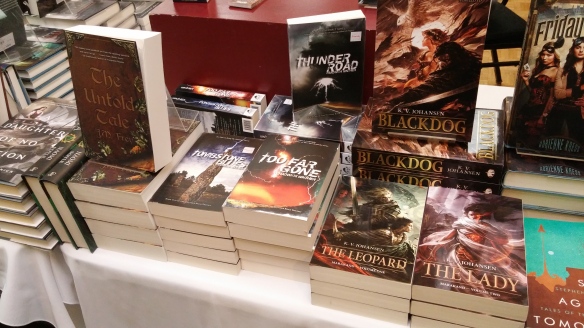 The last thing I did before leaving Ad Astra was join an informal meeting of the Sessorium of Creatives from The Ed Greenwood Group over lunch before hitting the road to Ottawa for some family time and a reading before heading west to Creative Ink Festival. I also met Dave Robison, who talks in Onder Radio voice all the time, and was a really cool guy. I met Ed Greenwood very briefly at GenCon in (I think) 1992 and for some reason in my brain he looked identical now and then. Maybe he really is an Archmage.

ChiSeries Ottawa was a blast. (Shakes fist at Derek Künsken for joke-booing ChiSeries Winnipeg when Matt Moore talked about the Auroras) It was all in good fun though, and the spirit of friendly competition, so if you see Derek out and about, give him a high five from me.

I was glad I lugged a few books along, because I sold a bunch. Almost sold out in fact. I had one lonely copy of Thunder Road left to take to Creative Ink.

I stayed with family while in Ottawa, and got to do a bunch of sightseeing.

The city was pretty chill about this giant spider menacing a church.

The Museum of Civilization (now the Museum of History) was the first touristy thing I ever did in Ottawa over 25 years ago, so I wanted to check it out again. Lots of amazing sights there. It was the art and artifacts of Canada’s west coast that really stuck with me though.

There were a few special exhibitions on as well. One on the B.C. gold rush, and another on “Horsepower” that featured sleighs and carriages. The gold rush exhibit had lots of great writing material. Can you believe I missed a viking exhibit by a matter of weeks? Bloody hell.

Oh look! I am worth something.

I checked out some fun restaurants and pubs, and had a visit with the Curator of the House of Commons. So grateful she was able to fit me in. I got to go in through the “Parliamentary Business” door. Insane.

I DID A BUSINESS.

Ottawa’s Haunted Walk was a lot of fun! I still haven’t done the one in Winnipeg, but I’ve read a lot of the stories behind it, and so it was neat to get to hear all new Ottawa specific stories. I didn’t see a ghost, but I did see some cool old buildings and got some fresh air. I’ll take it. 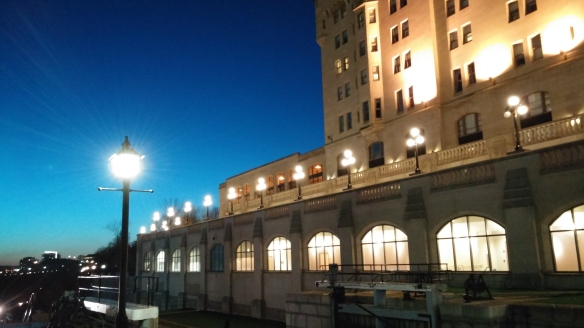 Off to Creative Ink. 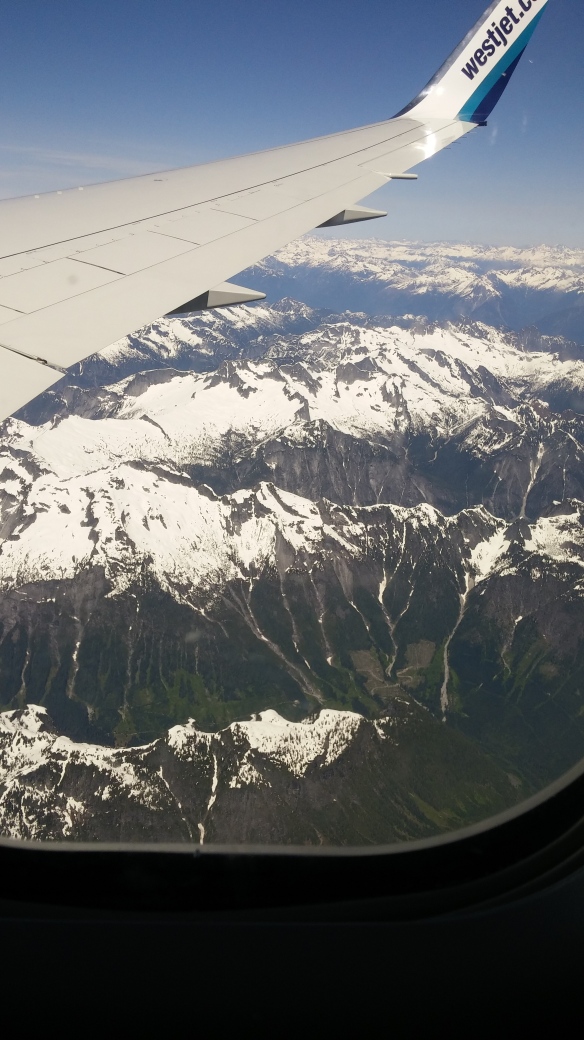 Goddamn I love seeing the mountains from the air. I don’t want to be in them. If Dungeons & Dragons has taught me anything, it’s that mountains are full of monsters.

When you’re used to doing Winnipeg-Toronto or Winnipeg-Calgary, Toronto to Vancouver is a long-ass goddamned flight. Even in an aisle seat. Even when the plane is half empty, and you get a row to yourself. I realize there are a lot longer (and much worse) flights I could’ve had though. Also, I didn’t load enough movies onto my tablet. The More You Know.

Creative Ink was incredibly well run for a first year con, so kudos to Sandra and her team of volunteers! The programming was excellent, and while the con was on the smaller side (to be expected for its first full year) the percentage of attendees actually at panels was very high. Creative Ink had great turnouts for readings, panels, and workshops. Lots of my friends from Calgary were there, so it was fun to see them outside of When Words Collide. 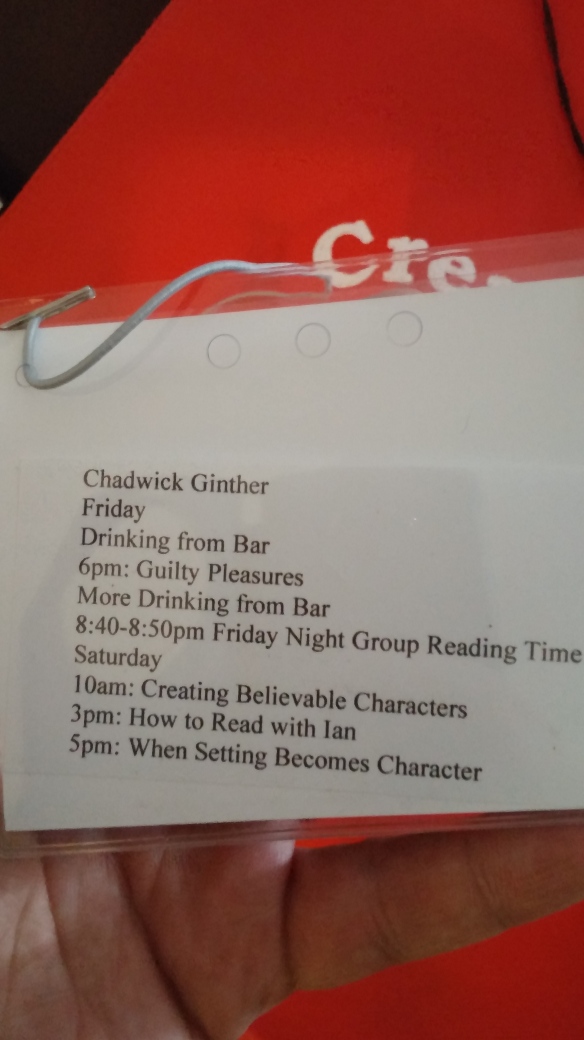 Does Sandra Wickham know me too well, or did she just want me to embarrass the hell out of myself at the “Guilty Pleasures” panel?

I snuck out of the convention on Saturday for a bit, because my cousin invited me to a whisky tasting fundraiser, and I got to see her pipe in the mayor of the District of North Vancouver. Great night!

I was so happy to meet Carrie Vaughn, and even happy that she turned out to be such a nice person. I interviewed her years ago. She’s super smart, and funny, and great to panel with.

Galen Dara was sweet and is such a talented artist! I loved seeing her step by step run through of creating this cover for Uncanny Magazine: 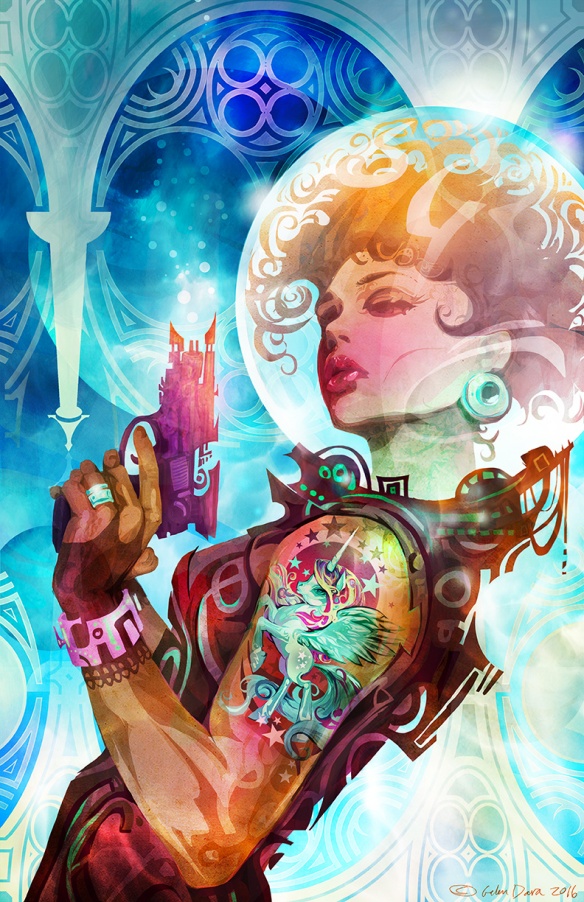 I had to leave too soon. My early flight caused me to miss most of Sunday (other than a quick breakfast and getting to say goodbye to a few early risers, but I’ll be back if I can swing it!