Those Who Make Us has a final cover, and the anthology can now be preordered here: 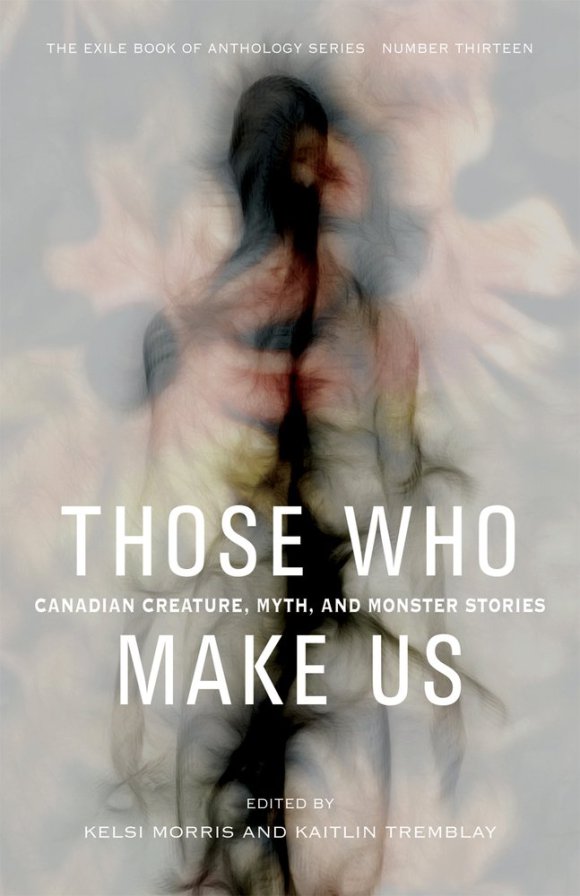 What resides beneath the blankets of snow, under the ripples of water, within the whispers of the wind, and between the husks of trees all across Canada? Creatures, myths and monsters are everywhere…even if we don’t always see them. This is a unique and powerful collection of all-new, cross-genre tales that take the reader into real and imagined worlds, ranging from an encounter with the Metis creature Rugaru to trolls dissatisfied with modern life, to the demons who follow us from our parents’ countries, and to Anishinaabe myths about the creation of creeks. Twenty emerging and award-winning authors explore the way we think about and interact with the unnatural – showing how much the stories we create can teach us about what it means to be human.Authors: Helen Marshall, Renee Salkikar, Nathan Adler, Kate Story, Braydon Beaulieu, Chadwick Ginther, Dominik Parisien, Stephen Michell, Andrew Wilmot, Rati Mehrotra, Rebecca Schaeffer, Delani Valin, Corey Redekop, Angeline Woon, Michal Wojcik, Andrea Bradley, Alex C. Renwick and Andrew Sullivan.

My contribution is a Thunder Road ‘verse story entitled “A Door in the Rock” which is set in Flin Flon and is full of dwarves and trolls and Chevy Suburbans. I’m very pleased with how this one turned out and I hope you’ll enjoy it. Thank you, as always, to David Jón Fuller for the Icelandic language assist.

So glad to be a part of this anthology! It includes so many great writers whose work I’ve loved, and so many more whose work I’m about to discover. And this makes three anthologies I’ve shared with Corey Redekop and four with Alex Renwick. Maybe we’ll need to put out a collection…

Nominations opened for the Prix Aurora Awards (and a whole mess of other awards too–though it’s the Auroras that are most likely to impact ’round Thunder Road Way) while I had my head down trying to finish my latest novel.

Instruction for how to nominate a story are available on the Canadian Science Fiction & Fantasy Association’s site. But why should you vote? Ottawa author Matt Moore wrote an excellent blog post on why we should participate in the Aurora Awards. The more people participate, and the more they care, the more these awards will matter.

I also want to mention the people that helped me create in 2015:

In addition to being my co-conspirator for the Winnipeg arm of ChiSeries, Samantha Beiko steps up every single time I give her a weird ass request, such as: I want to make story cards, or can you draw me a giant, evil cat? Even I want to put a new book together less than a month before Comic Con.

Sam did this great picture of Ted Callan for my story, “New Year’s Eve” 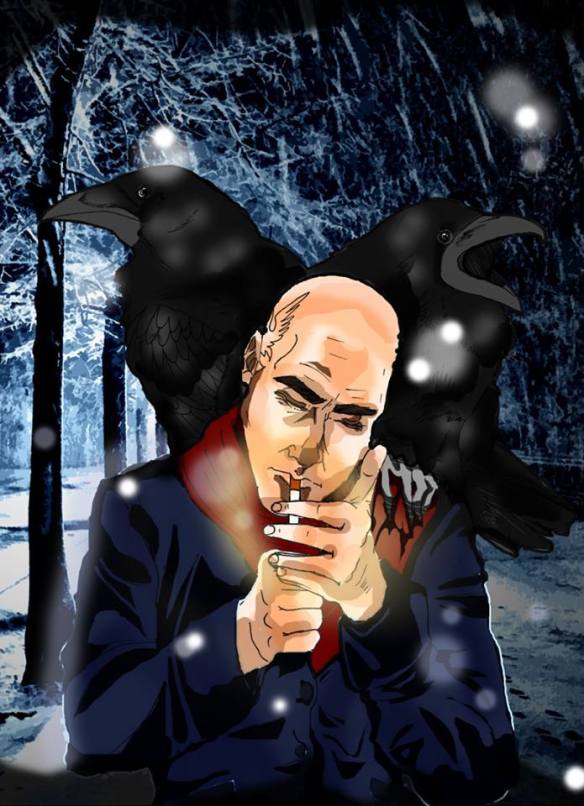 She also illustrated this super fun (and super creepy) Jólakötturinn, the Christmas Cat. 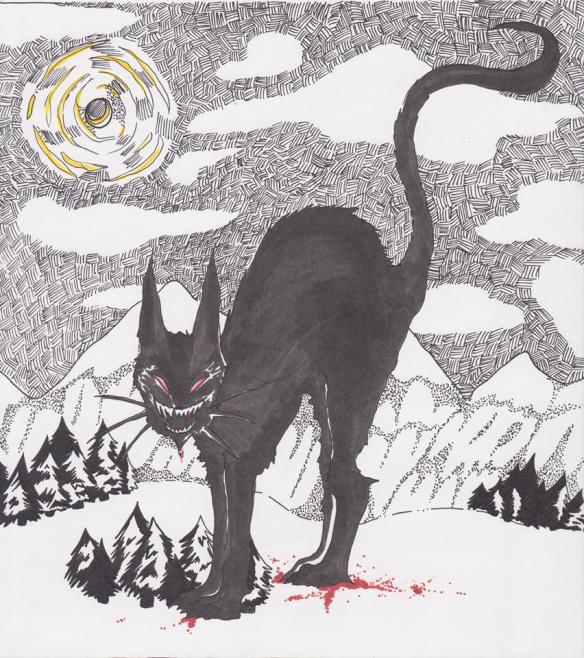 and she edited and laid out Shared World.

Sam is awesomesauce. Check out her stuff, and her dream book store, Valkyrie Books. 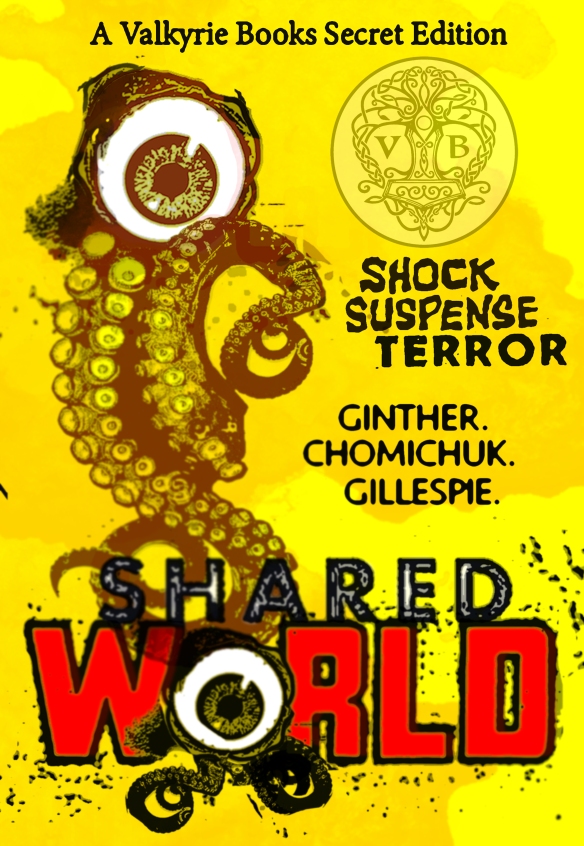 In addtion to being a great writer, Gregory is an amazing artist. His Infinitum was a wonderful, weird read. Time travel noir! 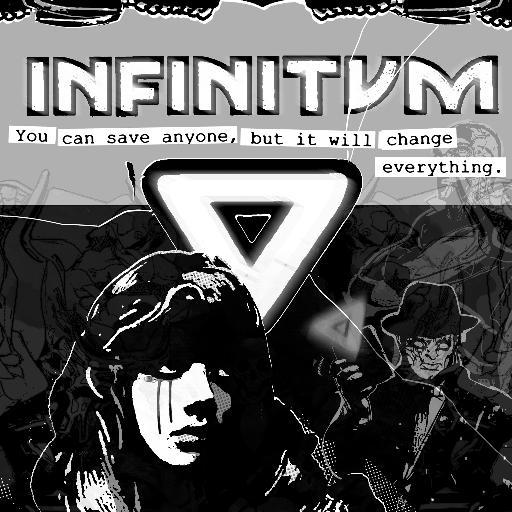 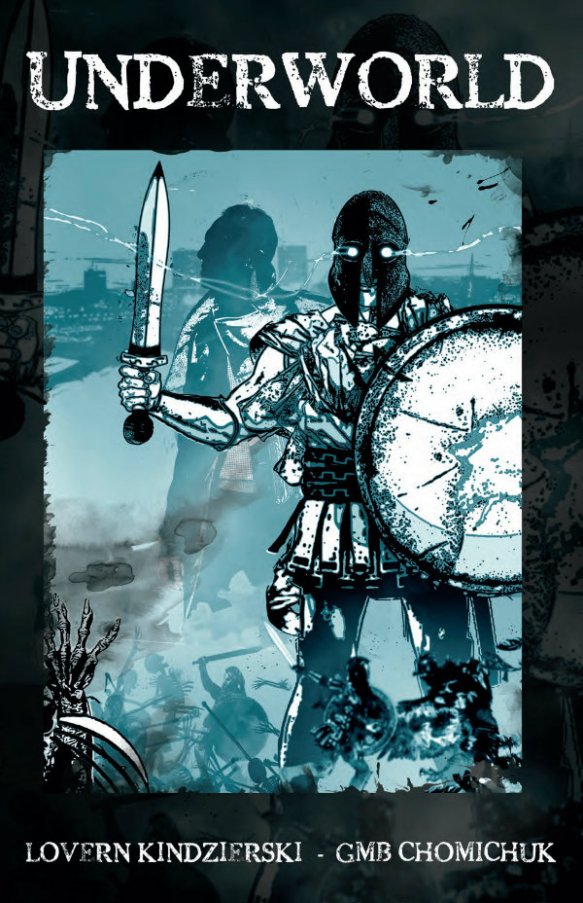 Silvia Moreno-Garcia wrote my favourite book of 2015, her novel debut, Signal to Noise. Silvia’s knows her Lovecraft, and everyone involved in Shared World was chuffed when she agreed to write us a kickass introduction. 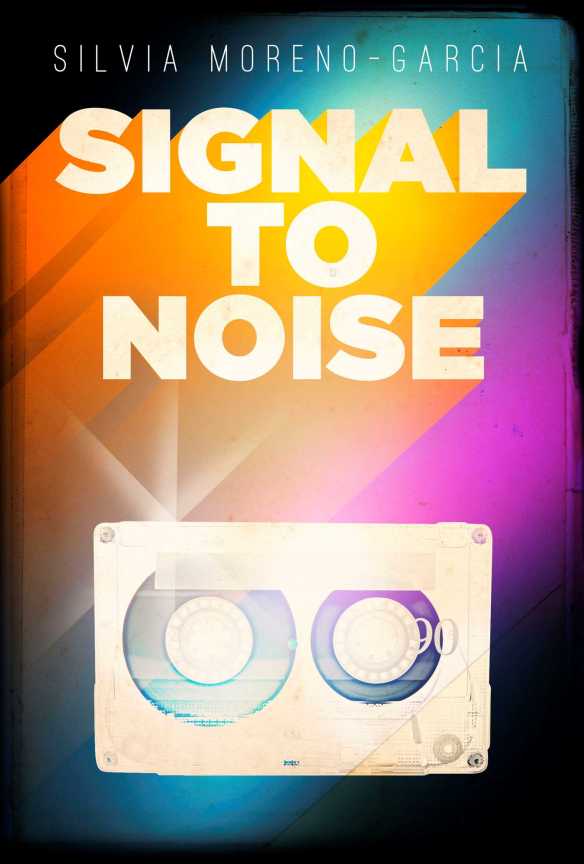 Michael Matheson was my editor for Too Far Gone. Michael was new to editing the series, anddid a bang up job. I’d love to have a chance to work with Michael again. In the meantime, checkout this anthology published by ChiZine Publications: 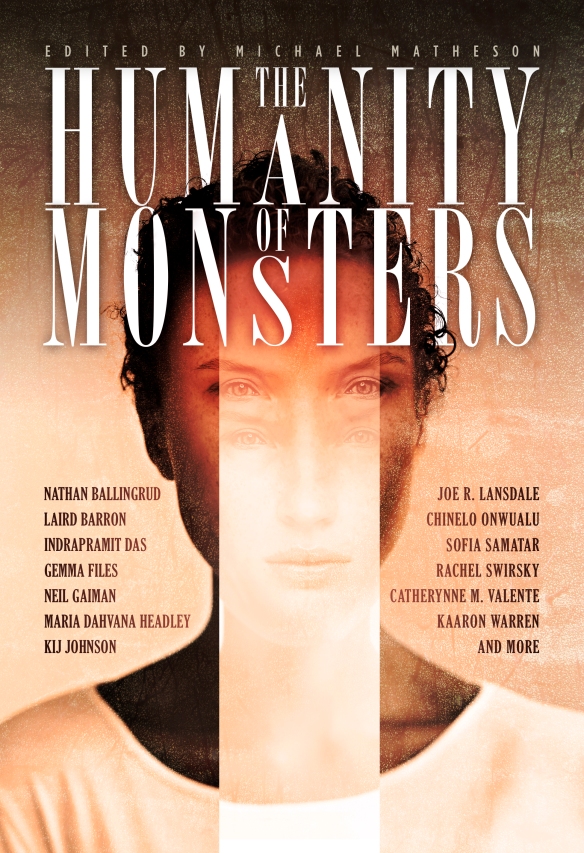 David Jón Fuller was my copy editor for Too Far Gone (and the entire Thunder Road Trilogy) and kept all my umlauts in the right spots. David is also a damn fine short story writer.

Scott Henderson did this gorgeous piece inspired by Too Far Gone. 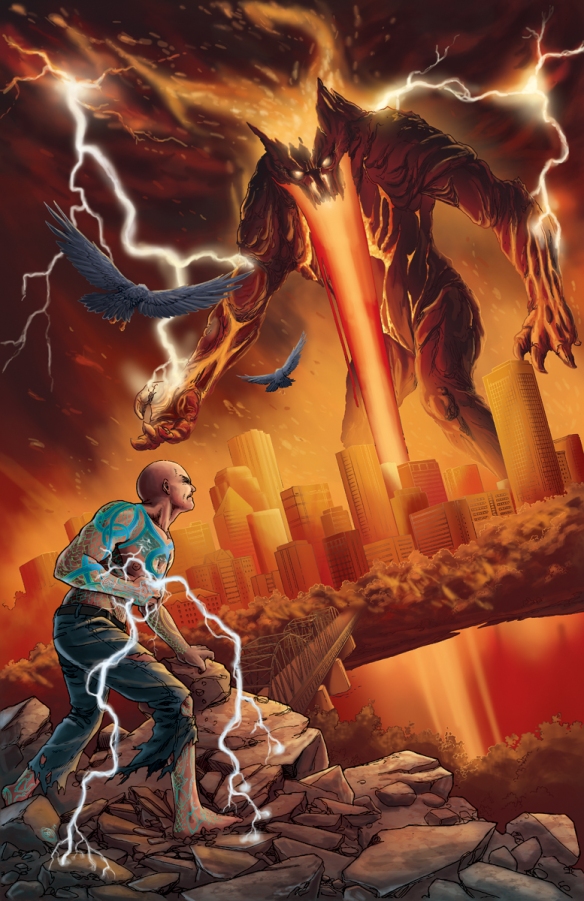 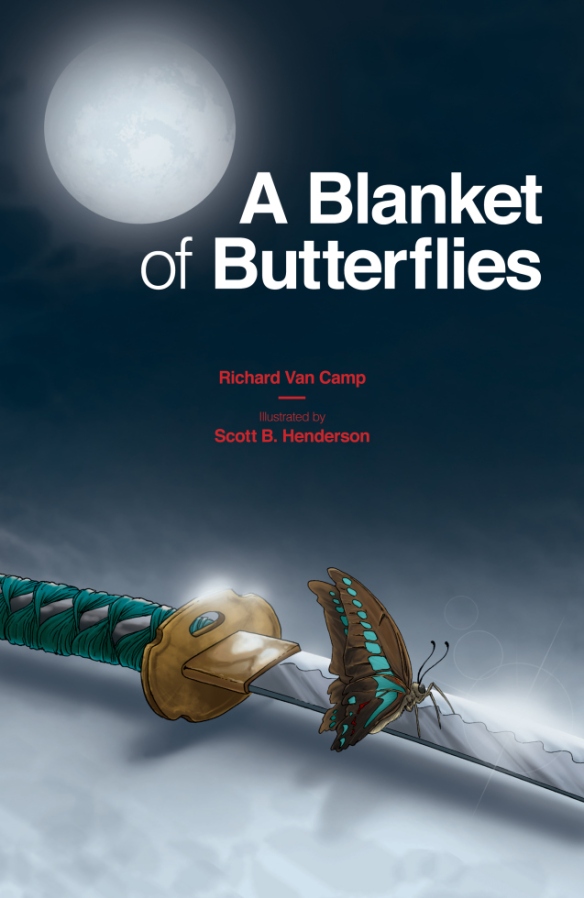 Claude Lalumière and David Nickle were my editors for The Exile Book of New Canadian Noir and bought my story, “The Last Good Look.” 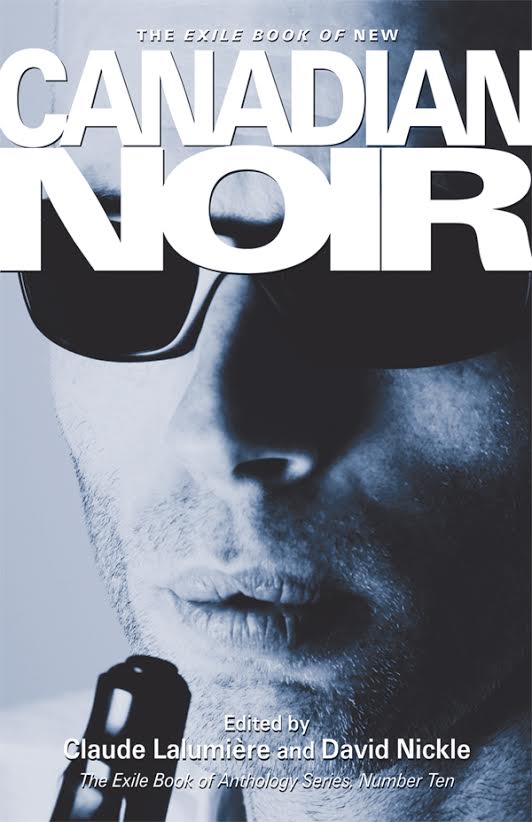 This is a killer anthology. I enjoyed reading every story in it.

Sandra Wickham and I are currently writing a novel together. She’s also sort of taken on the Herculean task of getting me back in shape. Her book Health and Fitness for Creative People is a great start. 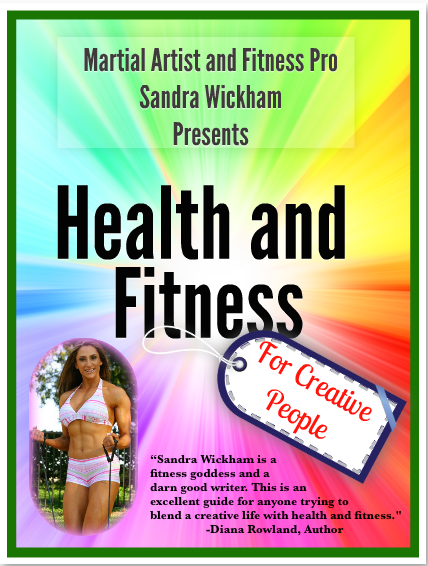 Kevin Madison has done tons of Thunder Road illustrations for me over the course of the series’ life. Here’s one of his most recent: 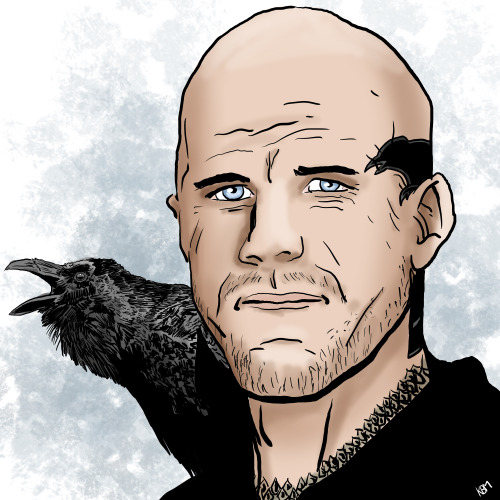 Kevin also wrote a comic last year, which was a lot of fun. Different artists illustrating various points in a superhero’s career.

Here’s some other stuff I really dug throughout 2015, heavily weighted towards comics, because that seemed to be the majority of my reading lately.

I helped back Canadian Corps on Kickstarter. Andrew Lorenz’s writing definitely hit me right in the Alpha Flight feels. 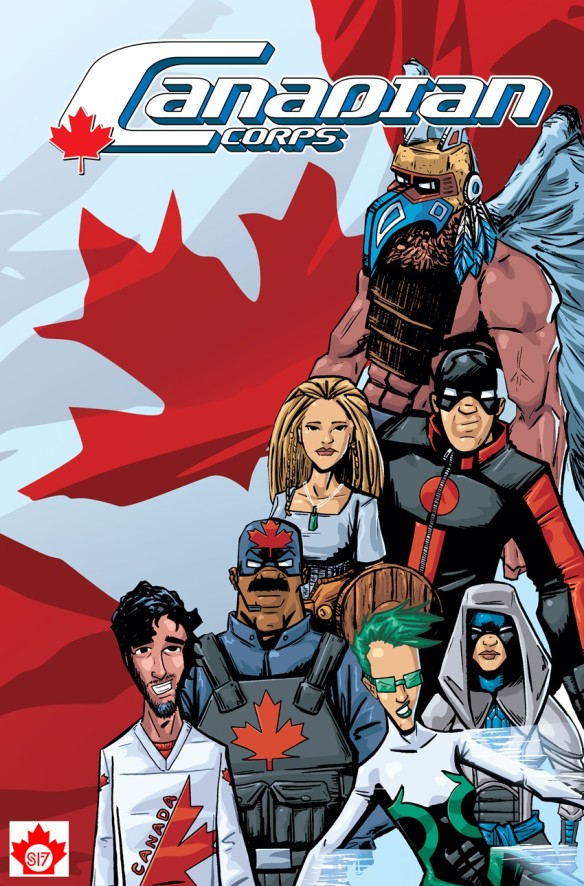 Donovan Yaciuk did the colours for Canadian Corps, but he also writes this sweet indie comic: 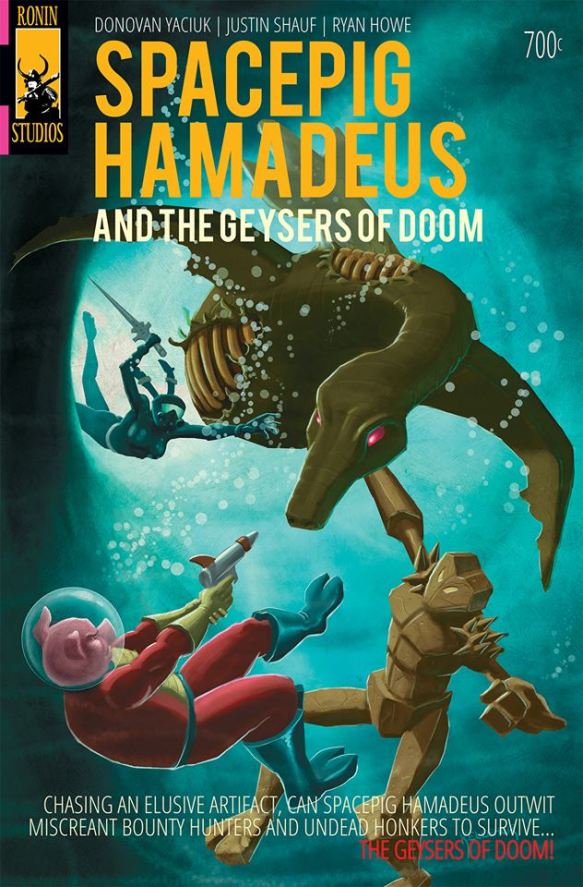 Justin Shauf is the artist on Spacepig Hamadeus and Canadian Corps. He also drew me this SWEET Dr. Fate. 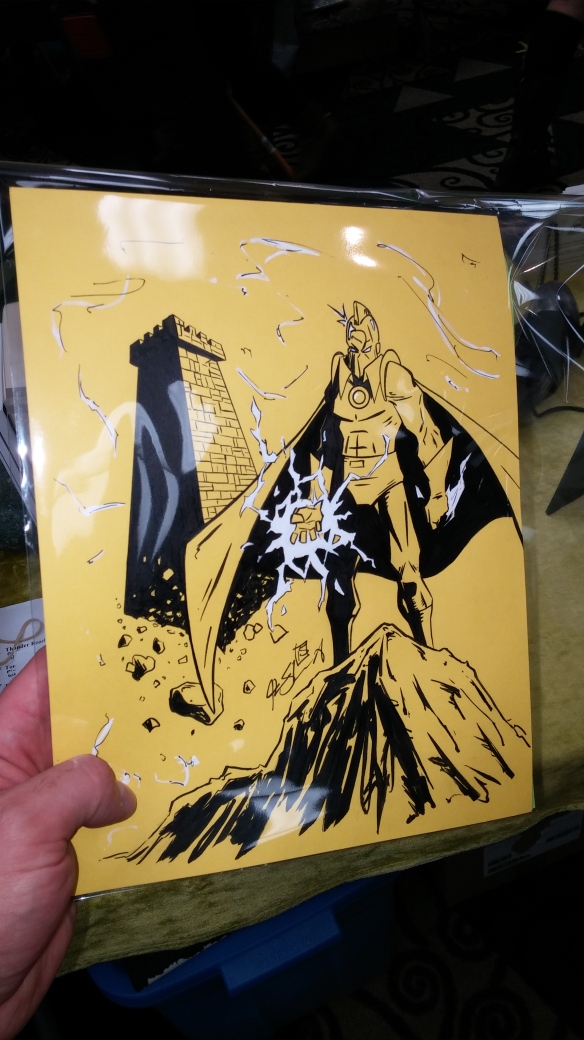 Rat Queens is written by Kurtis Wiebe, and its one of the highlights of my comic pull list ever time an issue drops. 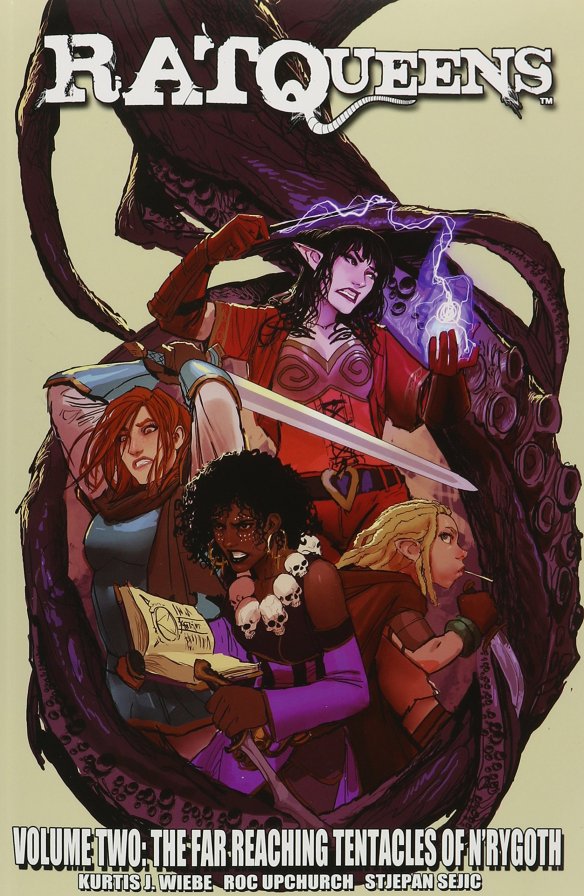 I adore Fiona Staples’ art on Saga. Another book that’s never disappointed me. 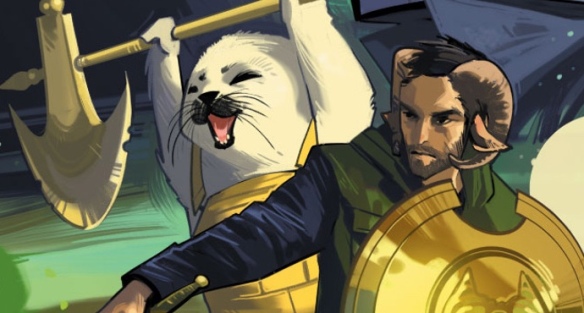 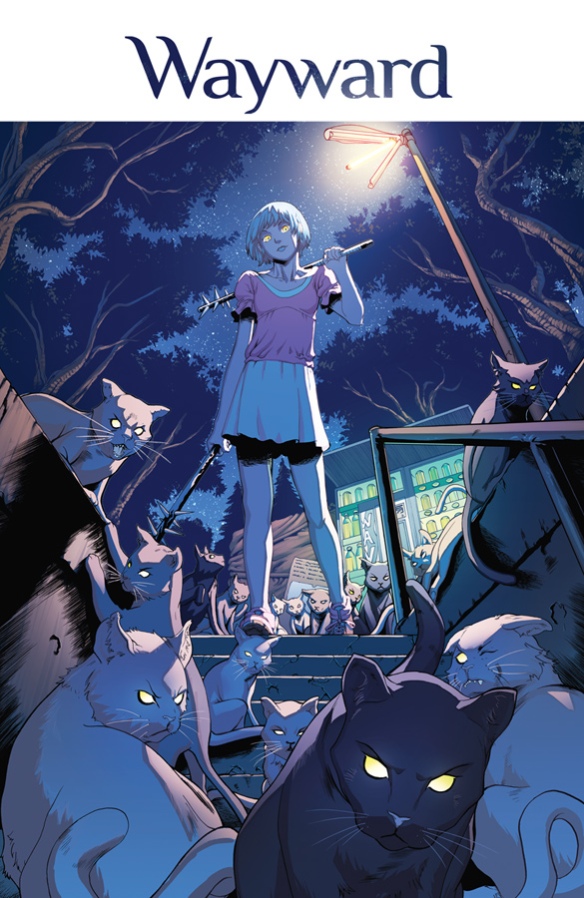 No matter how much I read, it still seems like it’s never enough! I feel like I’ve got a lot of cramming to do before I put in my nominations. What have you created or read that I should check out before nominations close?

I had an abbreviated, whirlwind When Words Collide weekend this year.

I arrived late on the Thursday before the convention, already running a sleep debt, and then promptly stayed up well into Friday morning catching up with my pal, tourguide and host, Kevin Madison. We left in the morning for Kananaskis so that I could do some location scouting for future stories (more on that later), and then I hit the con hotel in time to join Celeste Peters and Renee Bennett for supper.

Unfortunately, I missed the Patricia Briggs workshop on Character and Voice, it took place before the conference, and I wasn’t able to get the extra days off of work. I still submitted my sample though, and both she and the critique group had some great things to say about my non-Thunder Road-related work in progess.

Because I wasn’t entirely certain I’d be able to make it to Calgary at all, I didn’t sign up for any programming this year, not even a reading. But my publisher, Jamis Paulson from Turnstone Press, was one of the Guests of Honour, so I crashed the hour with Jamis panel that fellow Turnstone author, Edmonton’s mystery queen (and all around awesome human being) Janice MacDonald was also guesting on. 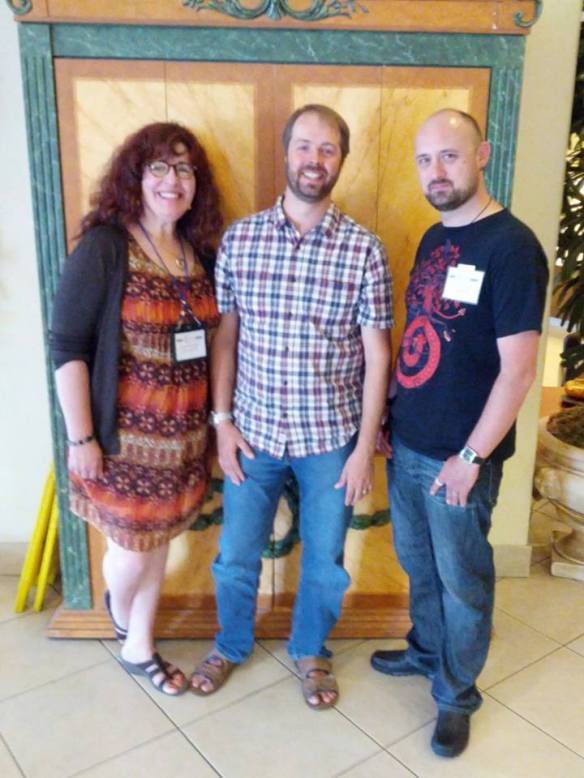 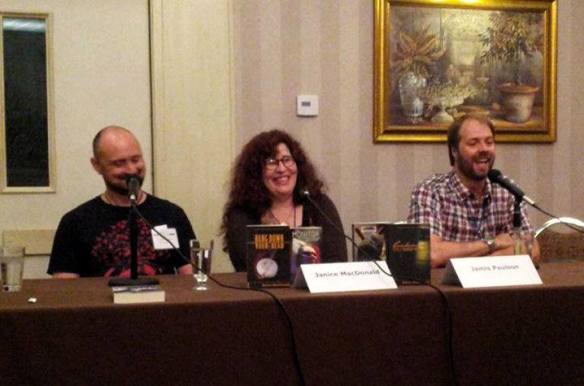 Some of my favourite folks are Alberta folks. I’ve said it before, I’ll say it again, I’ve met so many amazing people at the Calgary conferences I’ve attended. WWC feels like my home con even though its over 1300 KM away. I got to meet a bunch of my fellow critiquers for the first time. There were some great stories in that batch of first chapters and I think you’ll be seeing more than a few on the shelves sooner rather than later. It was lovely to hang out with Sandra Wickham, Ella Beaumont, and Jill Flanagan from the critique group, who missed no opportunity to remind me that I wasn’t there. They also made sure to drag me off to meet Patty before the con was over though, so there’s definitely no hard feelings!

One of the other great things about going to cons is finally getting to talk in person with people you’ve only interacted with on Twitter or Facebook. I enjoyed sharing a drink with JW Schnarr, Charles Propelec and Jeff Campbell even if the service and decor of the sports bar were lacking. They were also kind enough to offer their sympathies about the Blue Bombers woes to me when they saw I was from Winnipeg.

There were many launches taking place at WWC this year, but I was only able to take in one, due to my schedule, and that was the Urban Greenman launch. I’m so happy for Adria Laycraft and Janice Blaine. They’ve put together a beautiful book and I can’t wait to dig into the stories inside. I have so many friends who made it into Urban Greenman, and I’m not going to lie, I REALLY wanted to get a story in this collection. Alas, not to be, but I did write a story that I love, and I’m sure it will find a home eventually.

I always tend to spend a lot of time in the Dealer’s Room at any convention I attend, if you can’t find someone in the bar, they’re probably looking at books and swag. And I brought too many (and yet not nearly enough) books home this year, including Urban Greenman, The Puzzle Box by the Apocalyptic Four (aka Eileen Bell, Randy McCharles, Ryan McFadden, Billie Milholland), The Tattooed Witch by Susan MacGregor, and Warriors by Barb Galler-Smith and Josh Langston. Also big thanks to Owl’s Nest Books for stocking Thunder Road at their table this year! 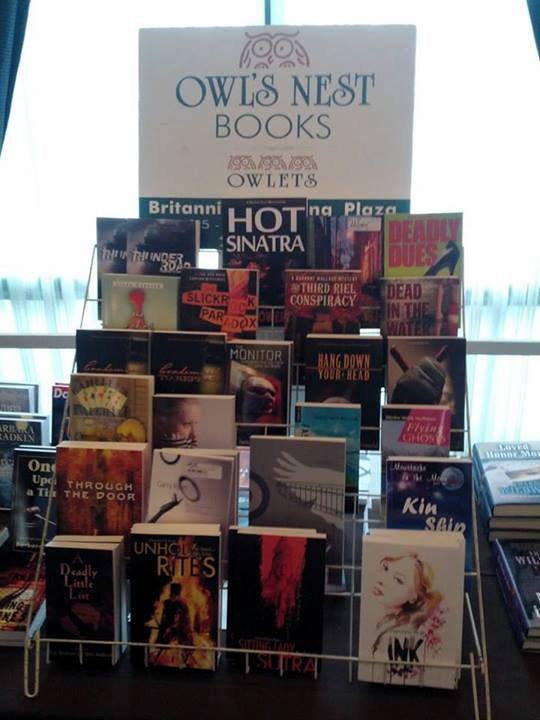 When Words Collide is also the host conference for the In Places In Between short story contest. I have fond memories of this contest. Learning about it was a big kicker to get me submitting my fiction. The first short story I every finished and submitted to strangers went to In Places in Between. I didn’t win. I didn’t place. I didn’t have a hot clue what I was doing then, but having my work critiqued by strangers was an eyeopener. A member of my writing group has placed in it, the extremely talented Chris Smith (“Crow-Maiden”), and this year, I was surprised to see my copy editor, David Jón Fuller had a story inside (not surprised he made it in, David’s a great writer, but I had no idea he’d entered) and now I see that he took second place. Congrats, David (and you’d better come to Calgary next year)! 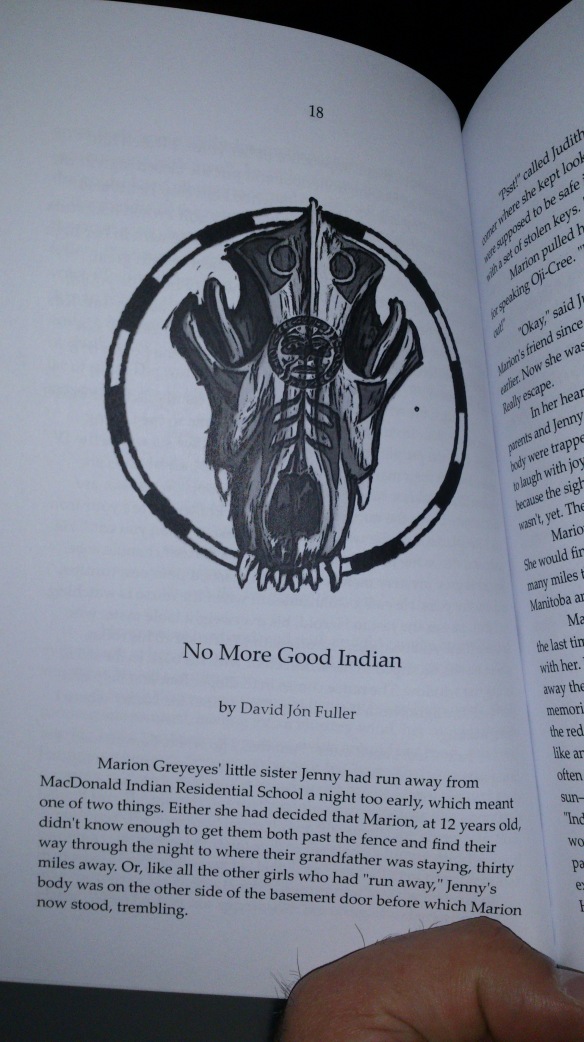 A note on the parties (because there are always parties): Whether it’s bubble-blowing gauntlet or a bowl of punch so heavily spiked that allows you to see through time, romance writers know how to have fun. To Tim Reynolds, for the Irish Whiskey (Mmm Writers Tears), and the generous soul (I never caught your name, I’m sorry!) with that fine, fine, bottle of Kentucky Bourbon (Blanton’s, I believe), thank you for roaming the halls with your libations, gentlemen. I took things easy this year, knowing I’d be hiking through the Badlands the next day, and somehow I felt being dehydrated, hungover, and scrambling up and down coulees was a remarkably bad idea (it was, evidently, I didn’t take things quite as easy as I thought).

Next year’s fantasy author guest of honour at When Words Collide is Brandon Sanderson! Which reminds me that I really have to finish writing my review/roundup for the Wheel of Time, now that its all done. But hey, that series was supposed to be a trilogy and it lasted decades and fourteen books, so if my review is a few months tardy, who’s going to complain? Brandon will be joined by Diana Gabaldon (Historical Fiction), Jacqueline Guest (YA, Historical), D.J. McIntosh (Mystery), and my Tesseracts 16 editor, Mark Leslie (as Director of Self-Publishing & Author Relations for Kobo).

Thank you Randy McCharles and all of the WWC organizers, volunteers, members, and guests for another great year!

I’m hanging my hat over on David Jón Fuller’s blog As You Were today, talking about writing, music and how they came together in the creation of Thunder Road. Metal, Myth, Monsters; that’s what David promises on his blog, so if you read and enjoy my post, stick around and see what he’s up to, you won’t be disappointed.

Ragnarök and Roll: The Music of Thunder Road