Another C4 is in the bag, and I feel like it was an unqualified success. Artist’s Alley was moved away from the main exhibition hall this year. I was worried that being away from the bigger vendors and the celebrity guests would hurt the artists, a worry made more serious by a slow Friday, but it really didn’t. I’ll admit to being concerned about that, given that I’d printed up a book just for the con, but Saturday and Sunday more than made up for that. Artist’s Alley was packed most of the weekend. We also had better lighting, a brighter, more cheerful space, and (and I can’t stress this enough) carpeted floor. That carpet made a huge difference with all the standing I had to do over the weekend.

I’d brought my tablet to do some writing, as there had been slow times last year where I could really dive in and get some words, but that wasn’t the case this year. There was always someone to talk to so not a lot of writing got done, other than a few messily scrawled notes to self in my notebook.

I shared a booth with Samantha Beiko, GMB Chomichuk, Ryan Roth Bartel, and Jeff Martin and had a blast. There were a bunch of other awesome folks in Artist’s Alley this year, Lovern Kindzierski, Scott Henderson, Nyco Rudolph, Scott A. Ford, Sierra Dean, and the Burst Books crew (Ron Hore and Leia Getty).

Sam ended up doing a Tilda sketch in her Valkyrie Books Dream Book. Which was pretty awesome.

Okay, this couple was just to perfect not to take a picture. I was wearing a Thor shirt of my own, and Sam is a huge She-Hulk fan. They were kind enough to pose with our books.

I talked to lots of folks, and it was surprising how many people stopped by who had actually read my books. Sales aside, the convention was totally worth it for the young man who stopped dead when he saw Thunder Road and realized that I was the author. His enthusiasm for my work certainly helped keep me energized over the 13 hours I was in Artist’s Alley on Saturday.

My limited print run Thunder Road short story “A Simple Twist of Fate” was a success also. I didn’t sell out, but I sold a lot of copies. It was also great to have something new for the people who bought Thunder Road and Tombstone Blues last year. Credit where credit is due, I got the idea from GMB Chomichuk and his Raygun Gothic limited print runs and Kevin Madison knocked it out of the park with the art, as did Samantha Beiko with the book’s design. 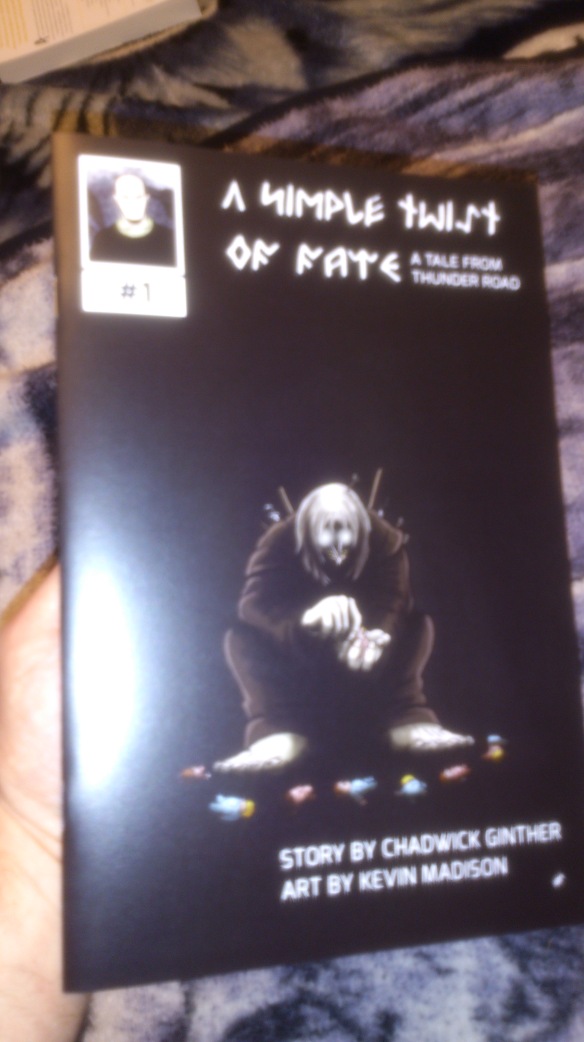 Too Far Gone releases next fall, so there will be a new novel in time for next year’s Central Canada Comic Con, but I wouldn’t discount the possibility of having another new convention exclusive short to debut at C4 2015. We’ll see, no promises on that front yet. Too Far Gone needs to come first.

Kevin Madison, the artist of “A Simple Twist of Fate” was in town to surprise his mother with a visit, and he had time to run by the con, which was awesome. He even happened to be there when someone was buying the story, and got to do a signing and sketchfor her.

Just when I thought I was about to lose my voice, it was time to sit down with Dan Vadeboncouer and Kenton Larsen for the Media Nerds Podcast. We talked a bit about my books and writing, but dove quickly into geeking out about movies and television, and discussing Star Wars (as happens from time to time). At the end, I gave a big shoutout to Jeff Vandermeer’s Southern Reach trilogy.

Met Edmonton artist and writer Jeff Martin. Jeff’s done lots of cons and had some cool tips that I’ll try to incorporate into future ventures. There’s still a few things I need to take care of if I want to start doing more of these types of cons. Better signage for one. Maybe some ancillary things like buttons or magnets for sale. Again, we’ll see. I also don’t want to lose sight of the fact I’m there to sell books.

I usually end up leaving C4 with all kinds of swag and 2014 was no different.  I thought I wasn’t going to buy any more art, as I still haven’t hung up everything from last year, but the heart wants what it wants. I got it in my head to get a Dr. Fate and Zatanna original sketch, but I couldn’t find the artist I was hoping to do it, so instead I may have commissioned a (modified) Dr. Fate helmet from Rampant Design. Clearly I cannot be left alone at my own table. I will turn all of my profits into swag.

Picked up a copy of Scott Henderson’s new graphic novel, Chronicles of Era. 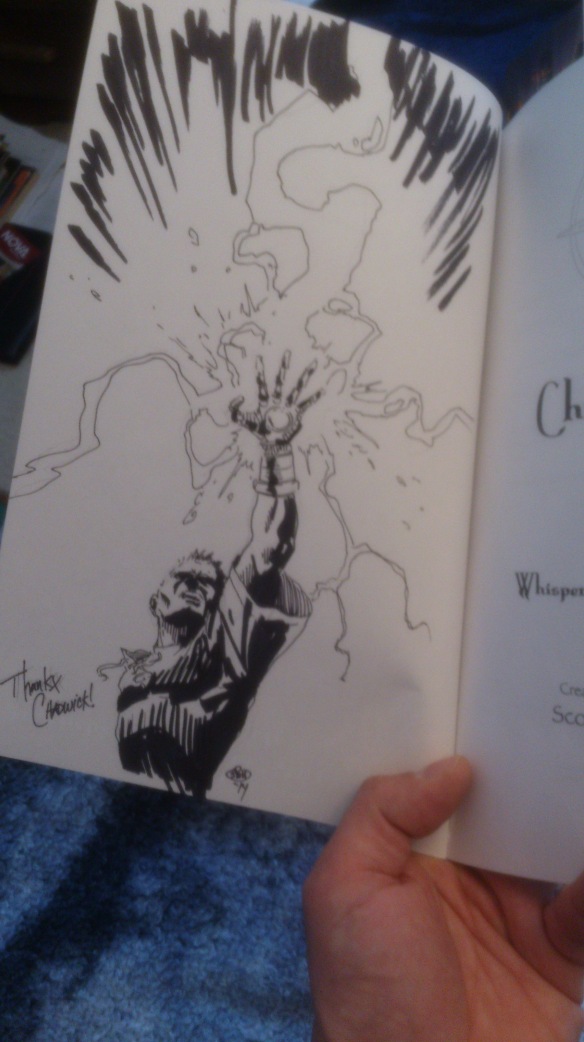 And got a pretty sweet sketch inside too.

Jeff Martin and I traded books. I sent him home with a copy of Thunder Road and now I’ve got a book about Space Wrestlers to read.

In a happy surprise, I found that I’m an entry in the Manitoba Authors colouring book fundraiser being done by the Manitoba Writers’ Guild.

My book came with Black, Grey, and Orange crayons. I might also draw some hair sticking out the sides of that hat…

I didn’t find the entire Beau Smith/Mitch Byrd Guy Gardner Warrior run, but this was a good start. One of my favourite issues, illustrated by Phil Jimenez, and Supermullet Superman? Gold.

Nyco Rudolph bills his work as “Art for people who are classy as fuck” so I’m pretty chuffed to be putting this “Viking as Fuck” print up on my wall. 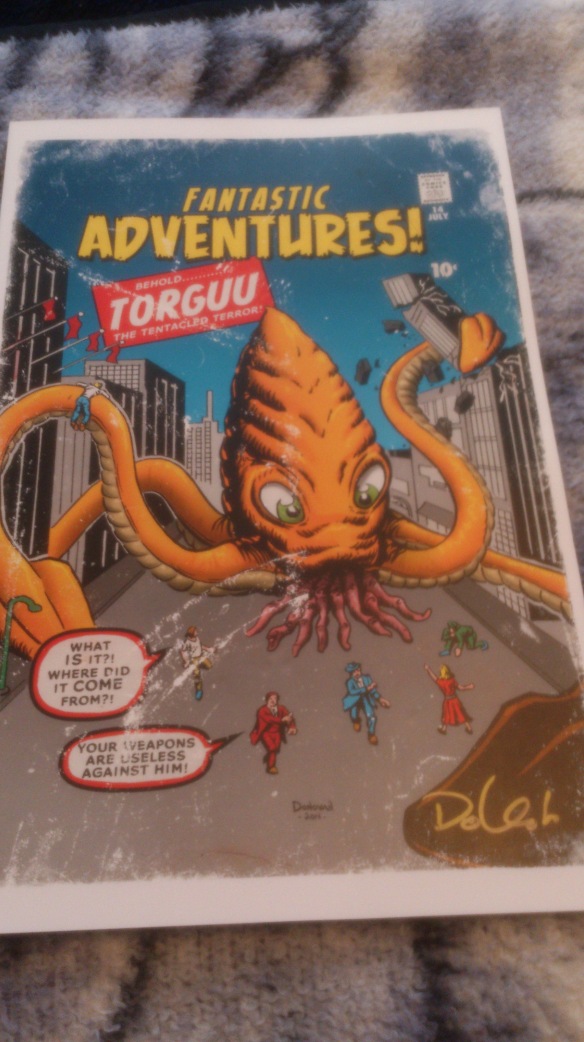 Talked to Hope Nicholson, who Kickstarted the return of Canada’s first superheroine, Nelvana of the Northern Lights, and scored a couple of sweet prints. Wished I would have remembered to bring my Nelvana collection with me though, it would be nice to have it signed.

A while back I commissioned an original Tilda drawing from Scott Henderson that was inspired by Tombstone Blues. Man did he deliver. Pictured here are a signed print, and the original inked page. You can still see the pencil marks in places. I love it.

Just look at it. God. I can’t wait to see what he cooks up for Too Far Gone.

Finally got my hands on volume 2 of Raygun Gothic!

And a sketch of Ghost Doctor 13 (And his sidekick, the brain of Neils Bohr)!

Time to read and find out.

I’m not much of a cosplayer myself. I can barely find the energy to dress up for Halloween these days (I went as Darkest Timeline Chadwick this year). But I love seeing the folks who go all out. And comic conventions are full of the highest concentration of balls out great costumes you’re likely to find anywhere. 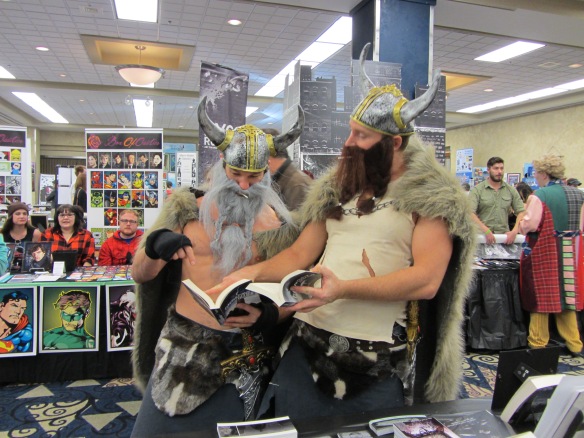 These vikings were awesome.

There were a lot of Poison Ivys this year (I suppose as costumes go, that one is evergreen. Bah dum bum), and lots of Harley Quinns. There always are. Fewer Adventure Time costumes than last year, to my disappointment. Newly popular were the Winter Soldiers, Quicksilvers, and Rocket Raccoons and Groots–not surprised by that at all given how sweet they were in their various movies.

My favourite Quicksilver of the weekend.

I’m always on the lookout for good Thor and Loki cosplay, and these were two of my favourites of the weekend. 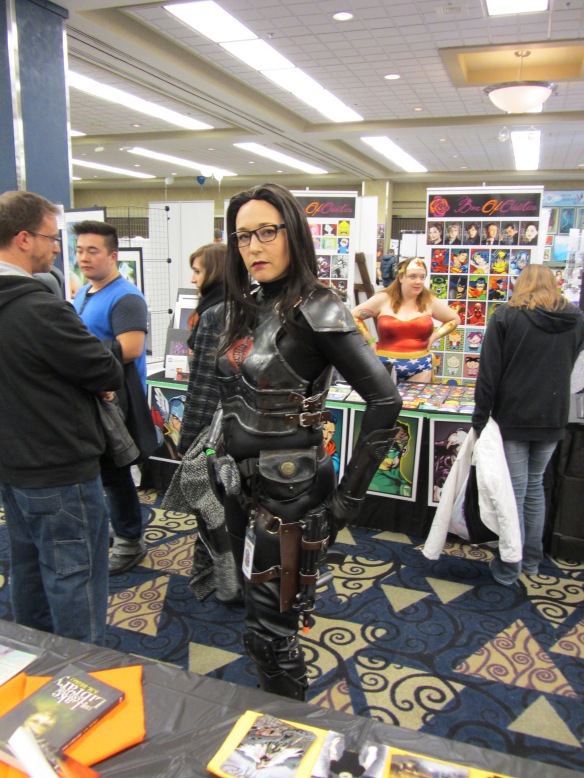 One of my favourite clever costumes. Not picture: Bat Sandals and Spider Sandals. 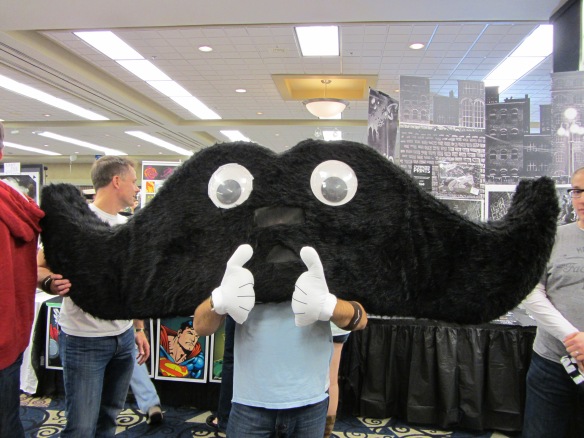 Props to this guy, who needed two helpers to maneuver him through the crowd.

If I could’ve found a knit brain slug to stick on my head, I totally would’ve bought one.

Boba Fett sucks, but this costume does not.