My northern Manitoba colleague, Lauren Carter, author of Swarm, tagged me recently and asked me to take part in a blog tour happening in the literary community across Canada. The gist of it is that I’m assigned four questions and then invite two other writers to join in. Here goes:

What am I working on?

I have a number of projects on the go right now, most notably the third book in the Thunder Road Trilogy, which you should see in Fall 2015. I’m also polishing up some short stories set in the world of the trilogy to keep you all occupied until next year.

In addition to my Norse Myth-influenced work, I’m editing the first book in an entirely new urban fantasy series, trying my hand at comic book scripting, and co-hosting and organizing the Winnipeg arm of the Chiaroscuro Reading Series with fellow author Samantha Beiko.

How does my work differ from other works in its genre?

Since my series is influenced by Norse myth, I’m not retelling the big ending of that myth cycle–Ragnarök, the Fate of the Gods–in the Thunder Road universe, that fate has already been dealt. In the Marvel Comics take on Thor, Ragnarök has happened at least three times, but what struck me as a myth fan was how interesting the stories that came after were to me. When Ragnarök is on the table, that is the only place the story can go. It’s inevitable. Having that great battle in the past also allowed me to avoid “ruining” any stories people might have loved from the sagas. They are there. They happened. My only caveat to this is that in my books, Loki survived his prophesied death (because if anyone could weasel his way out of his fate, it would be him).

Another notable difference is probably my use of Manitoba as a setting–not a place most people think of when they think of magic. I’ve read very little fantasy that uses Western Canada (and Manitoba in particular) as a setting, and I think there’s a lot to left to be said in this part of Canada.

Why do I write what I do?

I love juxtaposing the magical and the mundane and the Urban Fantasy genre is great at that. I grew up with old Tarzan and Lone Ranger stories, so adventure was set in my bones from an early age. When I went to listening to stories to reading them, comic books were my gateway (and I still read them) and I went from those to Lord of the Rings and Dungeons & Dragons and other fantasies. I can’t imagine wanting to write anything else. Fantasy allows me to write anything, and unlike my more realistically inclined writing colleagues, I get to have dragons and robots too.

How does my writing process work?

I am what is usually referred to as a “pantser” (as in I write by the seat of my pants). No plotting, no outlining. For me, writing is a lot like driving at night: the headlights allow me to see just enough to keep going, even when I can’t see my destination.

I’m a huge music fan (all of the chapter titles in Thunder Road and Tombstone Blues are taken from songs) and I also write to music, so it has seeped deeper into my process. One of the first things I do when I’m starting a new story is make a large playlist of songs that feel like how I want the story to feel. As I write and listen, I winnow them down to about twenty or so that form my book’s playlist. That soundtrack also happens to be an emotional outline of how I want the book to feel.

There are exceptions to this. The third book in the trilogy turned out to be something I couldn’t “pants”. I had built up the architecture of the series, and wrote certain scenes as they came to me while drafting the first two books. Because I wasn’t entering the world fresh, by necessity it required a bit more of a structured approach to writing than I am accustomed to. Not a bad thing, just not usually my thing.

Next up, author and illustrator, GMB Chomichuk and author and Valkyrie Books proprietor, Samantha Beiko!

THIN AIR, the Winnipeg International Writers Festival is fast approaching! It kicks off on Friday, in fact. I had a fantastic time as one of the festival’s guests last year, and am very much looking forward to taking in this year’s celebration of reading and writing as a member of the audience (If anyone out there wants to go into work for me, and take care of some of my deadlines so that I can see more of the festival, that would be lovely).

Here’s a few of the events that I’m particularly looking forward to:

A Pint of Bitter Murder: An excellent tradition at THIN AIR: readings and conversation featuring top mystery and crime fiction authors. This year, Winnipeg’s own C.C. Benison is joined by Gail Bowen at the Park Theatre.

Voices From Oodena: The Oodena story circle is my favourite place in Winnipeg. It’s an architectural wonder that doesn’t look like it belongs in this world (perfect for a fantasy writer!) and so this event has always held a special place in my heart. Oodena is a natural amphitheatre at The Forks, it really does lend itself to a magical night. Don’t miss Robert Malo, David McLeod, Colleen Nelson, John K. Samson, and John Weier.

Afternoon Book Chat With Andrew Kaufman & Lauren B. Davis: To be fair I probably won’t be able to make it to this one, I have to work, but I’d love to go. It looks like a great pairing and Charlene Diehl, Director of THIN AIR, is an insightful moderator.

Tuesday Mainstage: Changing the Family Channel: This evening features Lauren B. Davis, Andrew Kaufman, Ann Shin and Cassie Stocks. I’ve been hearing great things about Lauren B. Davis’ novel The Empty Room and I’ve recently heard that one of my very favourite publishers (the ever awesome and weird ChiZine Publications) has picked up the US rights to Lauren’s debut fantasy novel, Orphans! In Canada Orphans will be published by Harper Collins, and man… seventh-century Anglo-Saxon Northumbria, where Christianity clashes with the Old Religion and faith and magic are at war? 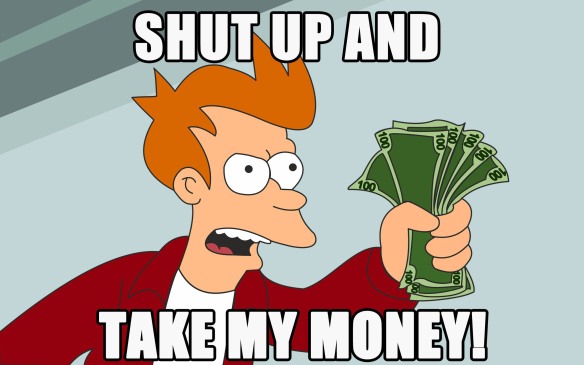 I’m hoping to tease some more details from her after her reading.

The Writing Craft: Andrew Pyper-Getting Started: The Six Ingredients You Need Before Writing Your Novel: As a committed pantser, I’m planning on checking this out to see if there’s anything that I can translate from Pyper’s “pre-writing” process to my own.

I’ve also enjoyed pretty much every one of the Big Ideas series I’ve ever attended, so do check those out too!