My review of Kristi Charish’s Owl and the Japanese Circus just went live over at The Winnipeg Review. 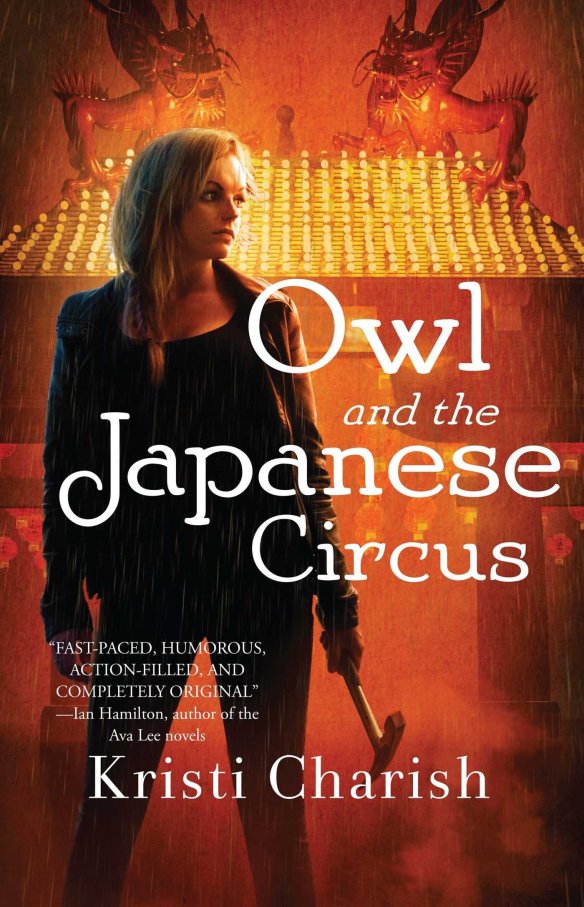 It was a really fun book! I was excited to read this one, because Kristi’s story “Canadian Blood Diamonds” was my favourite piece in the excellent superhero anthology Masked Mosaic. Read the review, but more importantly, read the book!

This post is a little late, I realize. But then I’ve also noticed these posts have been getting progressively later. Have I started dreading them as more and more goals pile up, unfulfilled?

So here’s my goals for August, how’d I do?

Not too bad, not as good as I’d hoped. But all things considered, with all the travel I did in August, I’m okay with that.

So, what’s up for September?

I’ve decided to drop the second short story from the list until I finally put that first one to bed. If all goes well, it’ll make a triumphant return to my October Goals post. Oh, and in the goals for the year category, another one bites the dust!

The pages have been proofed, the dedication and acknowledgements have been written, and I have put in the last words on Tombstone Blues. For good or ill, it’s off to the printer. I hope you’ll all love it.

Not as good as I’d hoped, unfortunately. There are reasons for this. (*cough* EXCUSES! *cough* Ahem) I didn’t write for most of the first week on my new job. I had two book reviews (one for The Winnipeg Review, one for Quill and Quire) and an article for Prairie books NOW all show up close together, and with similar deadlines. My response to paying work is generally to say “yes” and then figure out how I’ll make the time later. For year’s it’s been these reviews and articles that have helped to pay for my out of town conference trips. I made an admirable run at my word count goal for the final book in the trilogy, hitting almost 47000 words, but that’s not 50000, is it? Sadly I didn’t even look at those two short stories. The big goal of revamping my writing has been working however, and while 500-700 words a day on my lunch break and another 300-400 on the bus ride home may not seem like much, that roughly 1000 words a day is considerably more than I was averaging before May.

So what’s on the deck for July?

How about everything left over from June, to start.

And on the new side:

I think I’m already veering into “unrealistic goal territory” as there is editorial work on Tombstone Blues to take into account, so I’m going to leave it there and see what happens in August. But since we’re half way through the year, I thought I’d also check in on those goals for 2013 that I posted back in January:

Still some work to do there, I see. I’m not terribly worried.

Tombstone Blues will be finished, I’m not worried about that, but I don’t feel I’m done writing a book until I’ve approved the final page proofs. So until then, I’m leaving it on the list. I’ve probably hit the two-thirds point of my discovery draft of Book 3. There will be lots more work once that’s done, but things are going well, and I’m way ahead of schedule on that project, as I’d only anticipated starting to draft in November.

I’d thought the convention would be an easy one, when I first made that goal, it was my intention to hit World Horror Con in New Orleans. That plan got a bit waylaid when I switched jobs, so I couldn’t make it. I will get to World Horror some day. And I will get to New Orleans too (maybe for the Romantic Times convention next year). I will be going to Can-Con in Ottawa in October. I’ve been to Ottawa, but not  to that convention… I’ll leave it up to readers to decide if I can count that one and strike it off my list.

I’ve revised one of my old manuscripts, it’s still nowhere near submission shape, but it’s probably next on the list once the draft of book three is done. It’ll be good to take a little break and let the draft breathe before I get back to it.

So that leaves starting a project just for the fun of it. Looks like that will be my project for NaNoWrimo this year.

So not only did I not manage to post a list of goals for March, I also didn’t follow up with how I did in February. Time to remedy both of those things.

Some other things that are up for April, but don’t really count as goals include:

Finally, for those without the benefit of long memories, here’s what I had wanted to accomplish back in February:

How’d I do? Not too bad, actually.

Only the Letter Month Challenge didn’t get seen through to completion. I did have fun with it, though, and will probably participate again next year. It was kind of a last minute addition to my activities this year, so I think if I plan ahead a little, I’ll do better next year. It was awesome to get real mail again. I can’t even recall the last time I received a letter in the post before I joined the Letter Month club (and come to think of it, I still owe someone a letter…).

Of the two stories I submitted, one has already been rejected, but that’s okay. I’m free to send it off somewhere else (as per this month’s goals).

So these were my goals for January:

Now that it’s February, how did I do?

Yeah, that didn’t happen. I have finished drafting the story, but it still needs a lot of polish before I’m willing to let anyone (let alone an editor) see it.

I managed to send in three stories to On Spec for this submission period. Two of those stories are ones they offered to take a second look at if I made some revisions and the third, while not a new new story, is new to them, as they were closed to submissions when I first finished it. Fingers crossed, knock wood, not mentioning that “Scottish play” and all that.

I’m actually not sure what to say about this one…I wrote five blog posts in January, as well as had a guest blog from Clare Marshall. By the numbers I guess I hit my goal, but if I lawyer up on my wording, I failed. In one of those January weeks I didn’t actually write a blog, I only published Clare’s guest post. A technical win, I suppose?

Yeah, I’m going to call that a win too. It’s my blog, I can change the rules.

So what’s up for February? February actually has some paying deadlines so it’s going to be a little crazy.